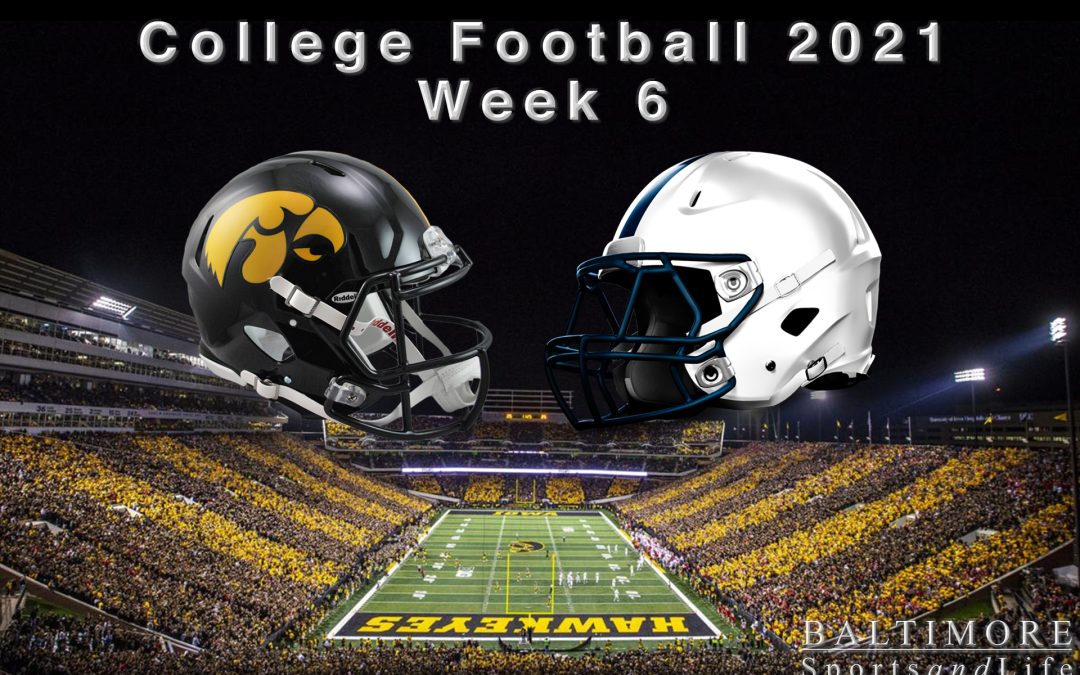 Overreaction: Well, it looks like Alabama and Georgia are all alone at the top, and not much else will matter this season.

If we crowned a college football champion on Columbus Day, this would be valid. At the very least, it does not look like anyone in the SEC will challenge the two behemoths.

But we still have a long ways to go. Injuries can change things in a hurry. Good teams can become great as a season goes on. Oklahoma is merely surviving at this point, but they improved significantly over the course of last season, so why not this year too? The survivor among Penn State, Iowa and Michigan may just be an even better team than we think. Ohio State can never be ruled out with their talent.

And even if it is just Alabama and Georgia, after the mess that was the 2020 season we can still enjoy having real college football back. One thing is for sure, right now it looks pretty wide open as far as who will be the other two teams that make the Playoff field, and it should be fun to watch the drama unfold.

Recalibration: Cincinnati is on track to make the Playoff after beating both Indiana and Notre Dame on the road.

I, and many others I’m sure, were ready to declare the Bearcats had a clear path to the Playoff in the aftermath of a convincing win at Notre Dame. They simply have to take care of the rest of the business on their schedule. But the more I think about it, the more I think they are going to need a lot of help.

Let’s assume that Alabama and Georgia end up in the SEC Championship game, both 12-0. I think it’s safe to say that no matter the result of that game, both will be in the Playoff. That leaves two spots. The Big Ten currently has 4 teams ranked in the Top 11 that are unbeaten…and that does not include Ohio State sitting at #7. Oklahoma, while they haven’t looked pretty, are still unbeaten and ranked #6.

Then you still have Oregon and Arizona State both at 4-1 in the Pac-12. Would a 13-0 G5 team get in ahead of a 12-1 Power 5 champ? Most years, I honestly don’t think so. Only the ACC seems unofficially out of the Playoff field (sorry, Wake Forest, but I’m not a believer).

Looking at Cincinnati’s remaining schedule, they have one game left against a team that is currently ranked, #24 SMU on November 20th. The rest of the teams they still have to play currently have a combined record of 12-21. That is going to be an anchor around the Bearcats’ neck. By the time the big SMU game rolls around, assuming the Mustangs stay unbeaten, Cincinnati will probably be well below the Top 4 in the CFP rankings, a victim of their conference’s overall weakness.

This doesn’t mean the door is slammed shut. Lots can happen. It’s not hard at all to see the Pac-12 champ with 2, or even 3, losses. The Big Ten bunch might all beat up on each other, leaving no clear Playoff contender. Oklahoma might not find that next gear and have some stumbles. Alabama and/or Georgia might lo….eh, probably not.

Overreaction #2: Let’s not jump the gun on Jim Harbaugh’s job security until after we see if he can end Michigan’s 8-game losing streak to Ohio State, the last 5 of those games under his watch. Not to mention surviving trips to Michigan State and Penn State before that.

Recalibration #2: If you are looking for a “G5” team to crash the Playoff, at least based on strength of schedule, BYU might end up with the better resume than Cincinnati if they go unbeaten.

Is Georgia actually a little better than Alabama right now? I’m ready to have that conversation.

Kentucky might be the best team no one is talking much about. Now 5-0, they finally cracked the Top 25 after knocking off Florida. Save a trip to Georgia on Oct 19th, their remaining schedule looks very friendly. A New Years Six bowl is not out of the question.

Mario Cristobal is one of the best recruiting head coaches in the country, no denying it. He’s built a lot of momentum and energy within and around the Oregon program. He could be a candidate for a lot of big time programs looking for a coach. But his game-management decisions continue to haunt him. In fairness, lot of things went wrong in the Ducks’ late game meltdown at Stanford; but it all seemed to begin with his choice to green-light a pass play on a 2nd down while Oregon was having their way on the ground and killing the clock in the waning minutes up by 7. The pass was incomplete, and allowed Stanford to save a timeout that would be crucial on their last gasp TD drive to tie the game. To quote Scott Frost, “we’ve seen this movie before.”

Staying in my home state, Oregon State currently has 8 players on their roster who were 4/5 star recruits coming out of high school. They have beaten USC and Washington in back-to-back weeks, teams with a combined 82 4/5 star players on their rosters. Jonathan Smith deserves some Coach of the Year love for what he’s getting done in Corvallis, and he’s the perfect example of what I talked about last week when it comes to a coach being the right cultural match for his school.

Urban Meyer might just be available to take the USC job if he wants it. I’d say now the bigger question is whether or not USC would want him.

The next college coach to get fired might be one who probably wasn’t on anyone’s radar before the start of the season: Washington State’s Nick Rolovich. Rolovich has made news primarily for declining to get the COVID vaccine. While he has followed all guidelines for unvaccinated individuals, he now faces an October 18th WA state mandate that all state employees be vaccinated, unless they have an approved exemption, or be dismissed. It is unknown whether Rolovich has applied for an exemption, but thus far it definitely appears he has not been vaccinated. Frankly, this is poor leadership, a major distraction to the team, and he deserves to be fired.

Tuesday is the 4-week mark before the release of the first Playoff rankings.

Last week there were three head-to-head matchups between ranked teams. This week….four! And surprisingly Alabama at Texas A&M is not among them. Unpredictable season.

I’m slowly becoming a believer in Iowa. I still don’t think they are the #3 team in the country, and that feasting off turnovers is not sustainable over the course of a season. At some point you will play a good team that just isn’t going to make those kind of mistakes. But setting aside that MD gave them the ball a whopping 7 times, the Hawkeyes did demonstrate that they have plenty of talent in their 51-14 curb-stomping of the Terps.

This time they definitely face a team that is more talented than they are. I don’t think Penn State is hitting on all cylinders offensively yet, but the Clifford/Cain/Dotson trio can absolutely light the scoreboard when they are. Will this be the game? Defensively the Lions were much more dominant against Indiana than the bend-don’t-break style they showed in previous games. They’ll definitely want a repeat of that, and would be well-served to force Iowa into 3rd-and-longs as often as possible.

Iowa does have one thing working in its favor; home field. They always seem to find a way of raising their game at Kinnick, especially against ranked opponents. I think this week will be no exception.

Can We Just Forget About Last Week?

Break out the hangover cures for both of these teams.

I wouldn’t read too much into the beatdowns they both suffered against the Top 2, except that neither the Hogs nor Rebels are Top 2. Of course, neither is anyone else in college football at the moment.

After looking very solid defensively in their 4-0 start, Arkansas defense was badly exposed against Georgia, at least on the ground (273 yards) since Georgia only attempted 11 passes all game. The Rebels aren’t much better defensively themselves, and their offense failed to put up many points in Tuscaloosa. But I like them to bounce back at home and believe Matt Corral and Co. will be too much for Arkansas to try and outscore.

If Only College Football Held a Draft

How is this not televised?!?! I guess it doesn’t meet FCC Standards of Decency. The only way to see the Battle For New England is to get yourself to Amherst. Good seats are still available!

This was all set to be an epic tilt between two ex-MD coaches, former HC Randy Edsall and former OC Walt Bell. But alas, Ol’ Randy didn’t make it.

My Pick: If you’re actually thinking of laying real money on this one, get help. Now.

My Top 2 (in alphabetical order)

The Rest (in alphabetical order)

I know I’m starting to sound like a broken record, but this is another huge Saturday of college football!