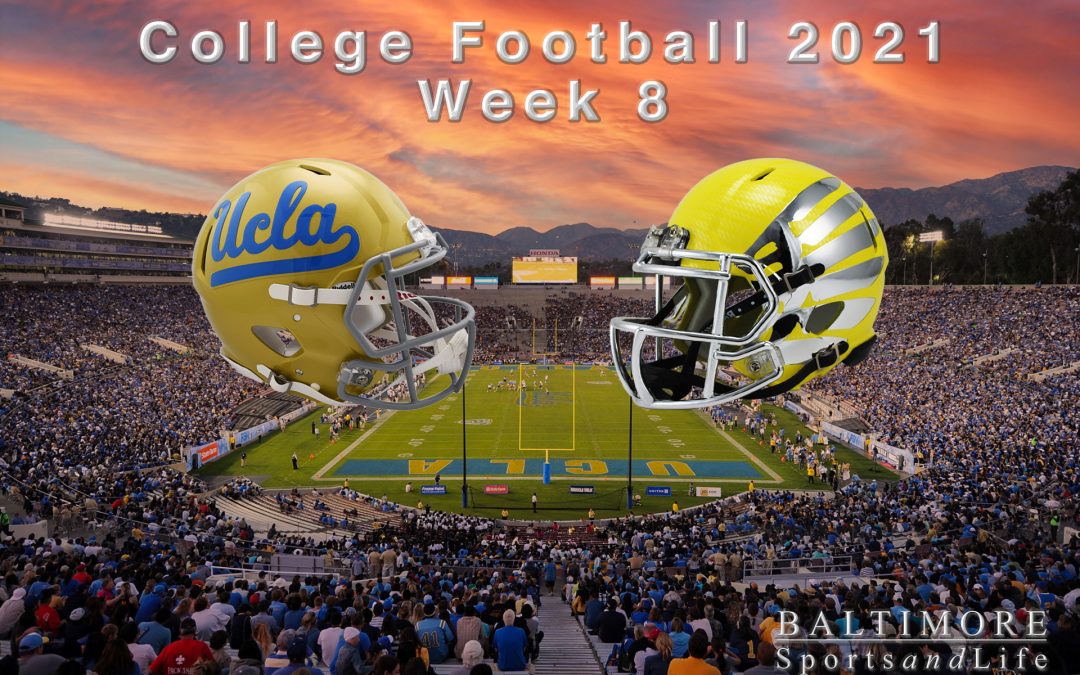 Week 7 was the third straight week a Top 5 team lost to an unranked team. Will Week 8 see that streak stay alive? Keep reading for my thoughts.

Overreaction: The Big Ten has a good shot of getting two teams in the Playoff.

This take is probably a week, maybe even two weeks old when the Big Ten had 5 teams in the Top 11, four of them unbeaten. While basic arithmetic tells us that losses were obviously going to mount for that group as they started playing each other (4 of those teams are in the East Division), one could still argue that two of them finishing in the CFP Top 4 was a strong possibility.

I don’t see it happening though. For starters, I think the only (slim) chance it had was for Iowa to go unbeaten and face an unbeaten East opponent. Then whomever lost would need a resume strong enough that they did not drop out of the Top 4. This was realistic for several reasons; not the least of which that Iowa was bound to lose at some point. I’ve been stating for weeks that their record and ranking was the product of smoke-and-mirrors, in the form of taking advantage of opponent’s mistakes, that masked a pretty bad offense. This was not sustainable and at some point in the season an opponent was bound to execute without making the mistakes Iowa needs to thrive. It didn’t need to be a top-ranked team loaded with talent. In fact, a rather ordinary team could pull it off if they simply played a clean game. Enter, Purdue.

Back to the main subject, Iowa’s loss has likely exposed them to the point where a return to Playoff contender status seems highly improbable at this point As for the East group, they will continue to beat each other up. None of the four teams have played each other yet, and two of them already have one loss. There’s just no chance that whomever does not win the division will have a strong enough case to be among the Top 4.

Recalibration: With the switch to Caleb Williams at QB, Oklahoma is back among the nation’s elite teams.

Williams’ debut as starter against TCU went about as well as anyone could have hoped. He was a highly efficient 18/23 for 295 yards and 4 TDs. He also ran for 66 yards, one of them a 41-yard TD dash. PFF graded Oklahoma’s offense at 0.41 Expected Points Added (EPA) for the game. That was the highest score for the Sooners since mid-2019 against lowly Kansas, with Jalen Hurts at QB.

Looking forward, while the Sooners should be favorites the remainder of the season, it won’t necessarily be a cakewalk. After a scrimmage against Kansas this week they face 5-2 Texas Tech; then matchups with #20 Baylor, still tough Iowa State, and finish at #8 Oklahoma State (don’t think the OSU crowd won’t be extra-jacked for that one, what with the SEC-thing and all).

Still, considering their Playoff position was looking very dicey just a couple weeks ago, things are suddenly much sunnier in Norman.

Two more empty seats on the Coaching Carousel; LSU will part ways with Ed Orgeron after the season and Nick Rolovich was dismissed at WSU.

It was a hard fall for Coach O. Just think, two seasons ago he had a record-setting offense, a Heisman-winning QB, and culminated it with a national championship. Those on the outside are probably scratching their heads over this. Those who follow the LSU program closely saw it coming for quite a while. Coach O can be a pretty abrasive guy who is too often prone to saying and doing the wrong things. That’s okay if you’re winning championships, but the leash gets very short when you start to struggle to stay above .500. More and more it sounds like he was losing the locker room in Baton Rouge, and not winning the public relations battle either. His act had gone stale and the time had come. Why he’s going to finish out the season really makes no sense to me. LSU needs to have The Randy Edsall Conversation with him.

I addressed Nick Rolovich in my piece a couple weeks ago, and again on the BSL message board. I have nothing more to add.

Last week I mentioned that Conference USA launched a Hail Mary towards the AAC to try and get the two conferences to merge a realign geographically. The AAC said thanks, but no thanks. Now we know why. The AAC is now expected to add 6 (six!) Conference USA schools to its membership: Charlotte, Florida Atlantic, North Texas, Rice, UAB and UTSA. That would leave Conference USA with 8 members, the minimum needed to call yourself a conference. It would also make them a carcass for the Mid American and Sun Belt Conferences to scrounge whatever worthwhile meat remains on the bone.

Speaking of UTSA, they are now 7-0 and ranked in the Top 25 for the first time in the program’s 10-year history.

The Pac-12 currently has the same number of teams in the AP Top 25 as both Conference USA and the Sun Belt Conference: 1.

The SEC fined Kentucky and Texas A&M $250,000 each for their fans running on the field after big wins against Florida and Alabama, respectively. So after an ugly display Saturday night by Tennessee fans who used a 20-minute game stoppage do to throwing objects on the field, surely a much stiffer penalty was warranted. But no, they were fined $250,000. Something seems off here.

NC State and Pitt look like the odds-on favorites to play for the ACC Championship. The Wolfpack have never appeared in the conference championship game, and last won an ACC title in 1979. The Panthers, despite being in the ACC just nine seasons, did win the Coastal Division in 2018, where they were drubbed by Trevor Lawrence and Clemson. They won a share of two Big East titles; 2004 and 2010.

Not much Heisman talk going on yet. Right now, I’d say the voters would narrow it down to two QB’s; Matt Corral of Ole Miss or Alabama’s Bryce Young. Caleb Williams probably had too late a start. A name to watch: Pitt QB Kenny Pickett, who is quietly having a sensational season. For non-QBs, Michigan State RB Kenneth Walker would probably get an invite to NYC.

No eye-popping matchups this week, but no week of college football is ever devoid of intrigue.

I know this might not stack up with past GotW matchups. The pickings this week were not what they’ve been of late. I chose this game for three reasons:

First, there are no wrong reasons to post a photo of sunset at the Rose Bowl.

Second, this is the game where I believe a Playoff hopeful could most likely be knocked out of contention.

Third, College GameDay agrees with me.

The Ducks season has gone sideways since their impressive Week 2 win at Ohio State. Injuries have definitely taken a toll, but even taking that into account they appear to be performing well below their potential. They choked away a game at Stanford, barely scraped by a 1-win Cal team, and for three quarters looked mostly lackluster against Arizona, arguably the worst team in the Power 5. Still, at 5-1 they remain the only real hope the Pac-12 has of ending its Playoff drought. But now they must face the most talented conference opponent they’ve played so far.

UCLA’s early win over LSU mostly hasn’t held up. Their two losses, to Fresno State and Arizona State, are to good-not-great teams. They obviously have no Playoff hope at this point. Still, they are a good team that has a shot at claiming the Pac-12 South (with a crucial game at Utah next week). Plus, they are the favorite against the 10th-ranked team in the country.

The Ducks have yet to cover the spread as a favorite against any of their FBS opponents so far. But they have done very well of late as an underdog; against Wisconsin in the 2020 Rose Bowl, USC in last season’s Pac-12 Championship, and of course at OSU. They’re also getting somewhat healthy; starters Alex Forsyth (C), Mase Funa (OLB), and DJ James (CB) are expected to play. Same goes for backup RB Trey Benson. I like the Ducks to win outright.

Need some midweek sports viewing? Don’t feel like watching the slow-motion train wreck that is Boston winning another World Series? I sure don’t.

I’ll be tuning in to watch this matchup between two high-powered offenses. App State is probably the only thing that will impede Coastal from winning the East Division. I think they’ll cover, but the Chanticleers win.

Win This, And Maybe You’re For Real

Army might not be the best team Wake Forest has played this year (Football Outsiders’ F+ likes all 4 of the ACC teams they’ve beaten so far a little better), but dealing with the triple-option when you haven’t seen it before is no easy task, for even elite teams. At least the ACC did them a favor in scheduling their bye week ahead of this one, to give them extra preparation time. Elite talent is usually still the difference in these sorts of games, but Wake Forest doesn’t have elite talent.

I think the four Top 5 teams playing this week (Georgia is off) will avoid keeping the upset streak alive. Two more weeks until the first Playoff rankings!