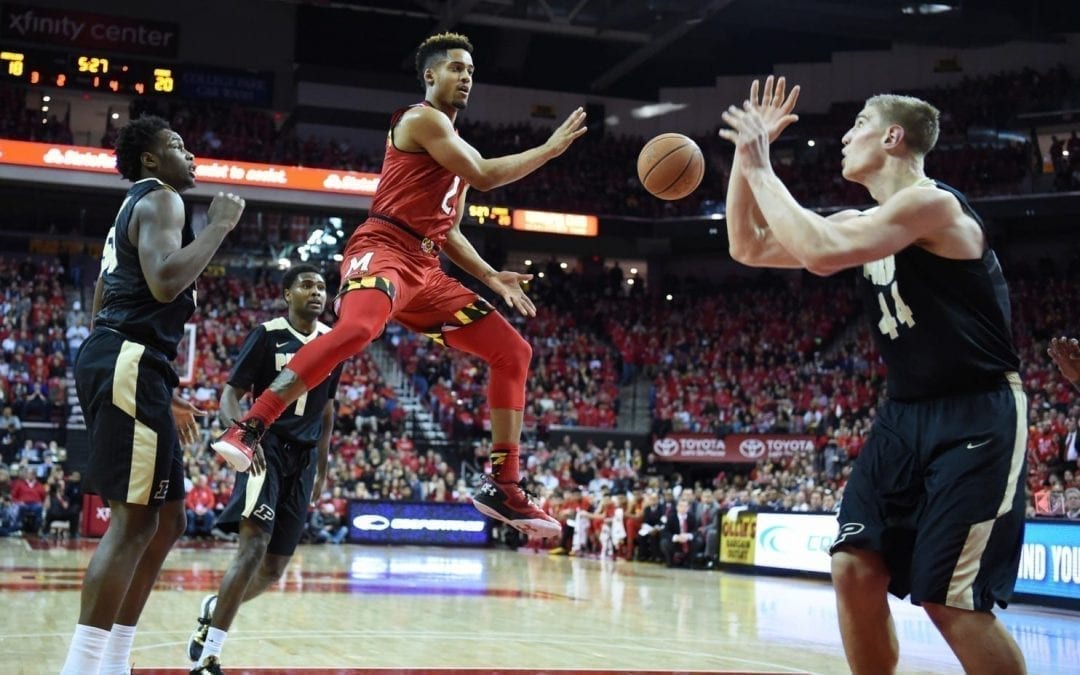 This has been a familiar refrain in sports over the years, complete with its proponents and those who produce data disputing the claim. Regardless of where you fall in regards to this argument, it can at least be agreed upon that both ends of the court are key when it comes to a team experiencing success. And when it comes to defense, the ability to string together stops can help a team make up for a subpar night on the offensive end of the floor.

In considering No. 2 Maryland’s chances of cutting down the nets in Houston, the strides made by Mark Turgeon’s team in regards to their play defensively will be key. Saturday afternoon against Purdue the Terrapins struggled for much of the game’s first 33 minutes, and with 5:58 remaining the visiting Boilermakers held a 51-47 lead while getting many of the quality looks they desired. Following layups from Rapheal Davis and Caleb Swanigan, Turgeon called timeout in an attempt to refocus Maryland on that end of the floor.

Over the last two seasons Maryland’s been very good late in close games, and that was no different Saturday. They executed well offensively and, after the aforementioned timeout, limited Purdue’s quality post touches. The end result was another quality win for their résumé while also remaining just a game behind Iowa in the loss column in the race for the Big Ten title. Rasheed Sulaimon produced a stat line of 21 points and ten rebounds, with Robert Carter Jr. adding 19 points and seven boards on a day that saw Melo Trimble shoot 2-for-12 from the field. Having the options needed to account for an off day from a star is one takeaway to make note of when it comes to assessing Saturday’s performance.

However the biggest takeaways involve Maryland’s ability to get stops, and their improved effort on the glass.

Entering this week Maryland leads the Big Ten in defensive efficiency in conference games per Ken Pomeroy’s numbers, due in large part to their ability to make opponents hit challenged shots. The Terrapins lead the conference in block percentage (14.9 percent) and three-point percentage defense (27.9), and their two-point percent age defense (44.4 percent) isn’t too shabby either. Purdue scored 36 points in the paint Saturday, but Maryland was able to do enough to force the Purdue guards into knocking down the shots they needed to make in order to leave College Park with the win. And as we saw the Boilermakers were unable to do so, shooting 3-for-25 from three and also attempting just five free throws.

Purdue has the size needed to win match-ups in the post, but so does Maryland. Carter and Diamond Stone, who’s made strides as a defender as the season’s progressed, played well against Hammons, Isaac Haas and Caleb Swanigan on both ends of the floor with Stone adding 12 points, six rebounds and two steals to Carter’s 19, seven and two blocks. Purdue’s big men had to work for most of their looks, and with their guards struggling to get anything going the Boilermakers faded down the stretch.

Forcing challenged looks only does a team so much good if they struggle to complete those possessions with a defensive rebound, and that wasn’t an issue for Maryland against Purdue. Purdue finished the game with nine offensive rebounds, which worked out to an offensive rebound percentage of 21.4 percent. That number is well below the 36 percent mark Purdue has hit in conference play, and it’s also a significant improvement on the 28.8 percent mark that Maryland’s Big Ten opponents have produced. Maryland has to rebound collectively, as they don’t have a single “elite” rebounder, and that’s what happened against Purdue with all five starters grabbing at least five rebounds.

Against Nebraska, Maryland allowed an offensive rebounding percentage of 34 percent which is one key reason why the Huskers were able to hang around until Trimble and Sulaimon hit two huge three-pointers.

When it comes to Maryland’s aspirations this season, attention to detail will be key. Whether it’s those unforced errors that occur on offense of keeping things tight defensively, that will be what determines Maryland’s fate in March and early April should they play that deep into the season. That will be something to watch for Tuesday night when the Terps host Bowie State; no one is expecting Bowie State to be a threat. But it would be nice to see Maryland get out of the gates quickly, putting the game away in short order to ensure that the key cogs gets some rest ahead of the stretch run. Maryland took another step forward with their play down the stretch against Purdue, and caliber of opponent aside Tuesday represents an opportunity to build on that while also getting some supplementary options additional minutes (and confidence).

ABOUT BOWIE STATE: The Bulldogs are currently 13-9 overall and 6-5 in CIAA play, and the key for them this season has been offensive balance. BSU’s averaging 77.5 points per game with six players averaging between 8.4 and 14.8 points per game. 6-foot-2 guard Justin Beck (14.8, 6.1 rpg) leads the team in both scoring and rebounding, with fellow guard Michael Briscoe averaging a team-high 4.0 assists per contest. Bowie State’s opponents are averaging nearly 74 points per game but the Bulldogs have also forced an average of just over 15 turnovers per contest. Points shouldn’t be hard to come by for the Terrapins in this one, but they’ll need to be mindful of their turnover count as well.