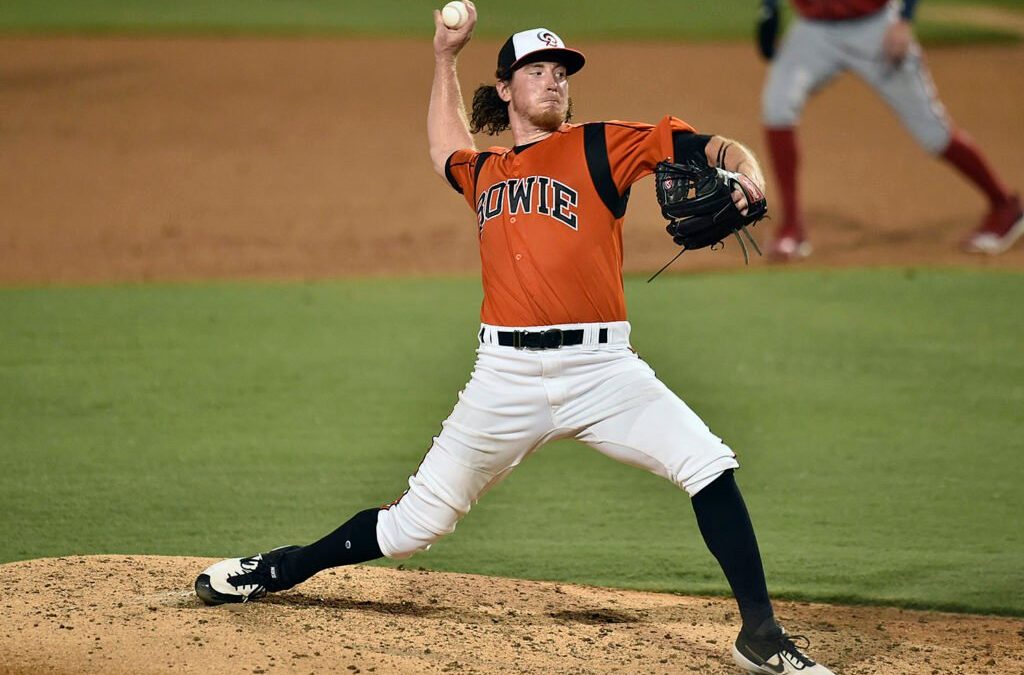 Baumann officially looks like the version of himself that dominated hitters in 2019 again. I would fully expect his next start to finally be with AAA Norfolk where he would be making his debut at that level. He has put himself back on the map to make his major league debut before the end of the 2021 season. Over his last four starts for AA Bowie he is 3-0 with a 2.05 ERA covering 22 innings with 26 strikeouts and only four walks. He is back to being a big presence on the mound who aggressively works his 93-96 mph fastball in the zone with a vicious slider. The most important thing is that Baumann must be healthy if he is being allowed to pitch five plus innings per outing over the past few weeks. For the season he has dropped his ERA with Bowie down to 4.89 which isn’t great but it obviously took him time to feel comfortable again after being shut down at the alternate site last year and being eased back into action this spring. In a perfect world he would’ve started the season with AAA Norfolk and indubitably made his major league debut by now but on the other end of the spectrum the injury could’ve been worse which would’ve delayed his debut at least until 2022. They may want to move him and Adley Rutschman up together since that will most likely be a tandem at the big league level very soon.

Speaking of the soon to be best prospect in baseball and a promotion to AAA Norfolk… It has to be coming no later then the end of this week. AA Bowie is heading off on a two week road trip and AAA Norfolk is coming back to town for a homestand so it would be an easy transition for Rutschman without having to go on the road. At the same time Bowie will be playing in Richmond this week so a drive to Norfolk wouldn’t be too far out of the way. Performance wise it would be a nice week to go out on top. Coming off of a cold week, Adley was absolutely on fire this past week. He showed off his plate discipline by walking three more times than he struck out (seven to four). His walk rate (16.6%) is well above the major league average and his strikeout rate (16%) is well below it. He also showed off his prodigious power with six extra base hits including a game on Wednesday when he hit a homerun from each side of the plate (the first multi-homer game of his professional career) and also doubled. I was at the game on Sunday and he just got under a high fly ball that was caught on the warning track. In the same game he walked twice and beat out a Baltimore chop ground ball for an infield single. The defense is more than major league ready and it looks like the bat is getting there too.

Mayo was an overslot draft pick taken in the fourth round of the 2020 draft. He started the season in extended spring training and suffered a minor knee injury but was able to join the rookie league teams in the Florida Complex League when play started in late June. Following last year’s draft much was made of his big raw power as a right handed hitter. He was holding his own playing third base most days but finally broke out last week connecting for three homeruns in two days. After walking twice in his first seven games he is currently riding a streak of nine consecutive games in a row with at least one walk (he has 10 total in that time). He will be just 19 for the rest of the year so there is obviously a lot of development to be done with him over the next few years but he is off to an encouraging start and may even see some time in A Delmarva before the season is out. At the very least he will start there next season and look to do damage against low A pitching much like Gunnar Henderson did. Mayo came in at #12 on our most recent prospect rankings, ahead of such luminaries as Yusniel Diaz and Jahmai Jones.

Moore was quietly acquired from the Minnesota Twins in 2019 during Mike Elias’ first few months as Orioles general manager. He pitched in the GCL that year to inauspicious results (5.59 ERA over 19.1 innings with 16 strikeouts and 11 walks) but came onto the radar with A Delmarva this season mostly pitching out of the bullpen. He had a 2.89 ERA over 18.2 innings with 27 strikeouts and 11 walks before earning a promotion to A+ Aberdeen. Things started off strong there as well with back to back scoreless two inning outing with five strikeouts and no walks but it has been a rough go since. Over his last four appearances Moore has given up 12 runs over 4.1 innings on six hits and eight walks with six strikeouts. Its still a short sample size so hopefully he can get back on track because he is one of many cool stories that minor league baseball can provide. A high school 16th round pick who had been with three organizations by the age of 20. Unfortunately this rough patch has his ERA for the season (both levels combined) at 6.00 which just doesn’t capture what he has been able to do this year.

I feel like I jinxed Rodriguez last week when I mentioned that even his worst start of the season wasn’t really bad. Well he finally had an actual bad start. On the plus side all five outs that he recorded were strikeouts that ended with a swing and a miss. I guess the other good thing is that he wasn’t injured. When I looked at the box score and saw he was taken out after 1.2 innings and only 46 innings that is where my mind went. But after looking at the play by play I saw that he reached what seems to be the magic number of 30 pitches in an inning before getting out of the 2nd. He gave up a solo homerun in the first inning and that was followed up by two walks, a single, a double, and a hit by pitch in the second. He left the game with runners on first and second but luckily Nick Vespi was able to escape the jam and save Grayson an earned run or two. It was a weird week for the typically dominant AA Bowie pitching staff as Cody Sedlock and Blaine Knight took their lumps as well against a lineup that didn’t appear to have much firepower coming into the series. I have no doubt Bowie’s pitching coach Justin Ramsey will work his magic and get these guys back on track for their next appearances. And if not, I’m not taking any blame this time…

Nevin has been pretty consistent all season so its surprising to see him show up on this list. That isn’t to say that he has been performing at a high level all year but it just feels like he hasn’t had much variance over the first three months of the minor league season. His batting average has been hovering between .240 and .250 most of the year with enough walks to keep his on-base percentage over .300 and the occasional homerun to keep his isolated power over .200. To be fair to him his BABIP is on the low side at .250 so maybe you can expect those numbers to shift up a bit moving forward. Its hard to know what to make about Nevin’s future, who comes in at 28 on our top 50 prospect list. He is a bit on the boring side as far as prospects go just because he doesn’t have any one tool that makes you sit up and take notice. At the major league level he will be stuck at first base defensively but could fill in at third base or corner outfield if you don’t mind having a butcher out there. If Trey Mancini is traded this week I would expect Nevin to fill in as his replacement between first base and DH. He can hit for power to the opposite field which could come in handy at Camden Yards. There is enough here to be a role player but he’ll need to turn things around from last week to make it happen sooner rather than later.