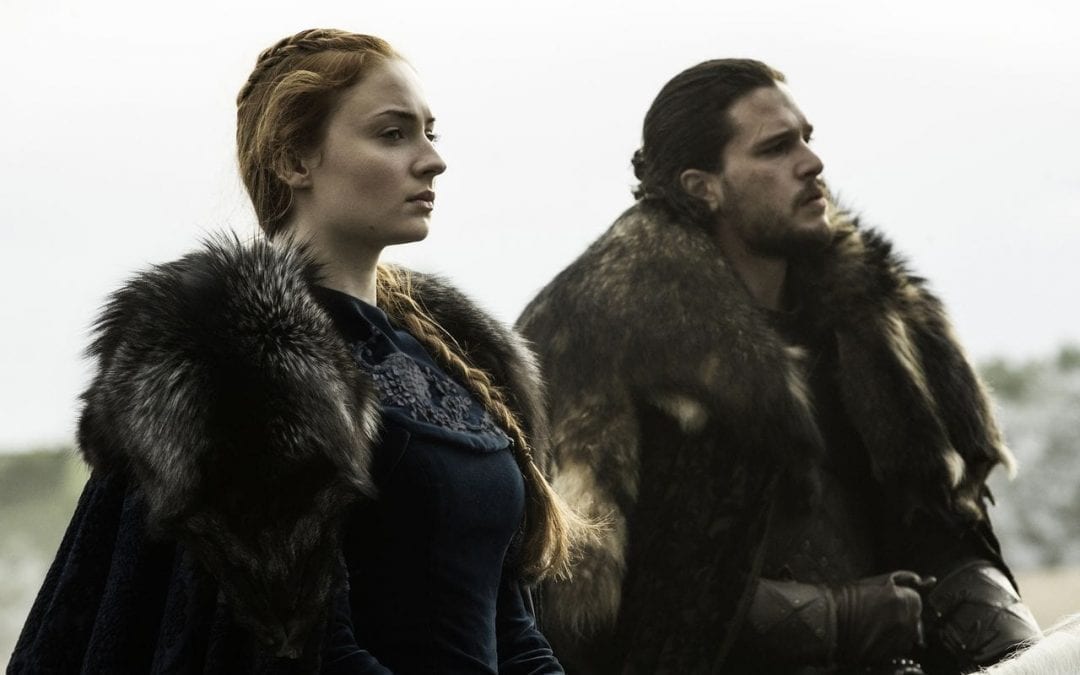 Throughout the Game of Thrones era, each season’s Episode 9 has been highly anticipated and must-watch television. Although the penultimate episode, it is often the climax of the season, whereas the 10th and final episode has (for the most part) been more of a recap and “touch-all-the-characters” show. We’ve been treated to epic battles (S2- Blackwater and S4- at the Wall), shocking murders (S1- Ned and S3- the Red Wedding) and fire (S5- Dany riding Drogon, Shireen burning). If the reports are true that this will be the last “Episode 9” of a Game of Thrones season, “the Battle of the Bastards” did its predecessors justice and then some.

Many (myself included until later in the week) expected an all-North, all-Jon/Ramsey episode, given that is exactly how the preview for Episode 9 played out. We were first treated to several scenes in Meereen, with a condensed version of the Battle of Fire and the Greyjoy siblings meeting with Daenerys. As soon as the episode began, you knew it was going to be a big-budget extravaganza. We start with a fireball flying through the air as it strikes the Great Pyramid of Meereen. Tyrion and Dany are having another “teachable” moment so as to not go scorched earth on everyone (Side note: ANOTHER mention of caches of wildfire in King’s Landing. I am so confident in my prediction.) From a plot standpoint, it was smart for Dany to only burn a few of the slavers’ ships in order to carry her army to Westeros in the future. I would have liked to see a bit more of the Dothraki attack outside the Meereenese gates, but that is neither here nor there. I really loved the scene with the Masters meeting with Dany. If you look closely, you can see Drogon in the background silently approaching, which was a nice touch. I’ve personally been bored of Dany just hopping on Drogon thematically, but last night was different because we finally got to see Rhaegal and Viserion unleash their wrath.

Later in the episode, Theon and Yara meet with Dany and Tyrion. People forget that Tyrion knew Theon way back in Season 1 but it is refreshing to have old character reunions. Was Dany enjoying Yara’s flirting? Have to think yes after all that smirking. The bigger points of this scene is the fact that Dany has a crucial Westerosi ally with a sizable naval fleet. The issue is that I am not sure how the Iron Islanders will appreciate Dany demanding giving up their way of life (raping and pillaging).

The show got infinitely better as we headed back to Westeros and into the North, where the leaders of both sides meet for a pre-battle council. You could really sense Sansa’s hatred for her husband, and obviously for good reason. Later during Jon’s War Council, we discover Sansa decides not to tell Jon about the letter she wrote to Littlefinger. Many fans have disparaged Sansa for her decision (that ultimately cost thousands of lives on both sides) but I will hope to defend her. Sansa clearly knows Littlefinger’s character and machinations. While her raven may have gotten to him in the Vale, there is still no guarantee the Vale’s knights arrive. I would say it’s better to not give Jon false hope than have him wait longer for help that doesn’t arrive. On another note, it really points to Sansa’s maturity and growth as a character as she realizes that it is hopeless if Jon continues to think Rickon can be saved, due to her past history with Ramsey.

As a big Davos and Tormund fan, I enjoyed their quick one-on-one about battles, and I was relieved to eventually see that both would survive the battle. I must ask if there is a potential foreshadowing and a little bit of the writers toying with us when Tormund declared that Jon Snow is not a king.

Finally, we get to the battle. I have longed hope that Rickon would be part of a bigger story in the show, but unfortunately, that did not come to pass. As Sansa predicted, Ramsey knew exactly how to toy with Jon and break his battle plans as he sent Rickon on a literal chase that was all for naught. I was a bit disappointed we never were able to build Rickon’s character, though that is line with the books (thus far). Even during the chase, my heart continued to race, praying and hoping that maybe Ramsey would miss and a true-born male Stark could rule Winterfell again. But alas, Ramsey is a dick and his arrow pierces Rickon as he is mere feet away from being saved by Jon. As Jon and his army charges, the Boltons follow, and carnage ensues.

As we’ve discussed in our thread, Miguel Sapochnik directed this episode and he did a truly masterful job at showing the goriness and brutality of medieval warfare. Sapochnik also directed the best episode of Season 5 in Hardhome, and themes and cinematography are similar in each. The camera angles of Jon among the injured and the piles of the dead (please burn them!!) were incredible. There was so much chaos and carnage that it really felt like I was in the battle, fighting side by side with Jon. The fact that I couldn’t tell who he was killing (i.e. Wildling or Bolton) really speaks to how it must feel in the thick of a medieval battle. Just truly realistic. We were also able to see different military tactic in surrounding the small remaining Stark forces as the Boltons plucked the outside men. Even as Tormund Giantsbane literally tears about Smalljon Umber, hope and success seem like a distant dream to Jon’s forces.

And as the metaphorical darkness sets on, light suddenly appears as the Vale knights come to the rescue and absolutely decimate the Bolton phalanx. It wasn’t at all surprising and frankly very Helm’s Deep-like but it was still enjoyable for me as we finally get to see the Vale knights do SOMETHING in this series. They had been collared and leashed by Lysa Arryn since Season 1. I personally didn’t enjoy Sansa proudly being next to Baelish as the cavalry charged and I do hope that that does not lead to Sansa thinking she “owes” Littlefinger, as he was the one who set-up her marriage to Ramsey in the first plate.Finally, all hope is finally lost for Ramsey as Wun Wun comes charging through the gates of Winterfell as Jon and his Wildling army follow. A heartfelt RIP to Wun Wun as the last of the living giants as yet another northern, supernatural species is killed off by the show-writers.

Finally, Jon comes face-to-face (or arrow-to-shield) with Ramsey; which the audience has waited for all episode, and really, for several seasons. It was as satisfying as it was justified to see Jon absolutely pummel Ramsey’s face into a Hot Pie stew until he lets off at the end to chain and imprison Ramsey. I truly was proud and satisfied when the Bolton banners collapsed on the ground and we finally saw the direwolf of House Stark raised at Winterfell. The satisfaction continues when we find that Ramsey is tied up in the kennels where Sansa awaits him. She finally gets her vengeance as she uses Ramsey’s own hungry dogs against him, finally ending the brutal bastard’s life with his own cruel playtoys.

It truly was a very rewarding, heart-pounding and epic Episode 9 and it will surely lead into another crazy season finale.

A graduate of Xavier University, Chris began his writing career as a Xavier Musketeers Athletic Communications Intern where he wrote previews and post-game recaps for men’s basketball, women’s basketball and other Olympic sports. He has worked in the sports industry in various capacities for over 5 years. Chris is a fan of the Xavier Musketeers, the Baltimore Ravens and the Baltimore Orioles. Other hobbies and passions includes Game of Thrones and, as an Eagle Scout, volunteering as a Boy Scout Troop Assistant Scoutmaster. Chris was born in Baltimore, raised in Baltimore County and currently resides in Canton.