I Just Wanted To Watch Golf 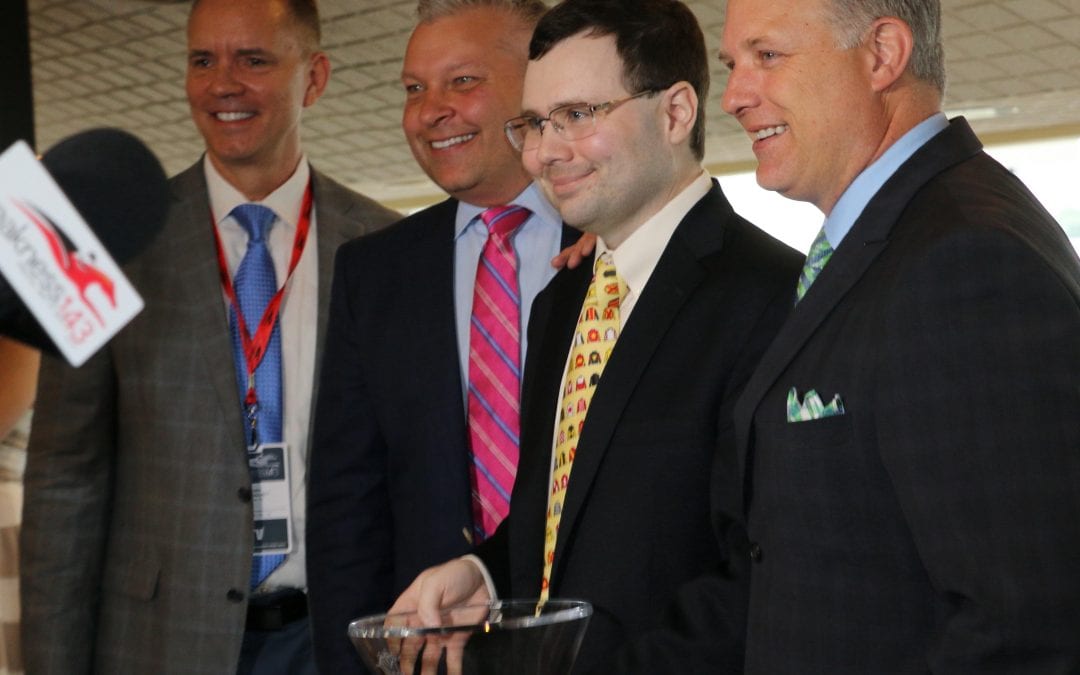 They rolled me away from my shoebox of a hospital room at the start of network coverage of The Masters on a Thursday. The monitor showed sun-splashed patrons enjoying the change in seasons at one of sports prestigious venues. I couldn’t tell you if a snow squall or beach day took place outside my window that had all the charm of freshman year in college. After six biopsies, many sleepless nights and about half a year, it was go time. Off I went through a maze to land on an operating table and come away with a souvenir. I got a port in me. It’s where the chemo – among other things – zips through a catheter and transforms me into another world. I just wanted to watch golf.

Let’s go back to the start. In another life, I enjoyed my job as a TV sports producer. Walking into the control room one evening, I felt this sensation that zapped up my spine and produced seemingly more electricity in my body than my monthly bill. It shook me. I played it off as a joke. I went to my primary doctor a few days later. Not once did anyone say the word “cancer.” There wasn’t a playful “c-word” or anything. I never thought about it because it wasn’t in my orbit. On a brilliantly bright Saturday morning, I received a call from my doctor on my way back home after spin class. Words like “oncologist” and “lymphoma” came off his tongue effortlessly. He kindly said he was sorry. I spent the rest of the day on the phone with family and friends. I tried not to cry on every call. I failed each time.

In between the biopsies and my port placement, I took a number of field trips to the Emergency Department. That’s one of the ways you can tell the veteran patients from the rookies. It’s not called the ER officially. Pain followed from the cancer that grew inside me. During the 2018 Winter Olympics, I produced a nightly pre-game show. Who knew that a PETScan would ruin my pet project? On the final Friday of the games, I should’ve received a battery of tests. I didn’t get past the first one. The cancer decided to eat some of my bone to get my attention. Spoiler: it did. I ended up with a fractured hip and needed immediate surgery. Let’s review. I had a fracture for a period of time (at least a week) and kept on plugging at work. It’s the Olympics after all! It was also remarkably stupid. An opioid became the only thing that gave me some relief. I’m sure some interesting sentences came out of my anchors lips that week.

Meeting a gem of a doctor on the other side of town, we arranged for a Monday morning date in the operating room. I signed my life away for the first of many times, got a pair of crutches with instructions and received strict instructions to stay in my apartment that weekend. I didn’t follow them very well. I can’t bold or underline how much I love working in television. It’s the only place I’m extremely comfortable. It’s my house. Having recently diagnosed with “maybe cancer,” I took a risk and spent that Saturday at the TV station and even went out for dinner with a friend afterword. Is it dumb? Yes. Would I do the same thing again? Absolutely. I know that I excel in producing television and would risk something bad happening to do another show. It’s just something that gets in your blood and seeps down to your marrow. Call me crazy – but that’s my call and I’ll live with the results. In this case, the show turned out fine, dinner was delightful and on Monday morning I picked up a metal plate and two screws in my left leg that I can feel every now and again.

Time to jump back in the hospital. I spent a week under evaluation for pain, night sweats, fevers and overall fatigue. Classic symptoms of Hodgkins Lymphoma. My oncologist called it Hodgkins Lymphoma. Guess who didn’t? The person at the Mayo Clinic who reviews biopsies and other tests. I finally found out my ailment: Langerhans Cell Histiocytosis(LCH). I received my first dose of chemotherapy in April. The drug of choice? Cytarabine. A specialist in Texas – one of the best in the LCH field in the world – wrote many articles on this chemo drug and called it a jackpot to cure LCH. It turned out to be two bars and a cherry. One cycle of this drug is five infusions (usually Monday – Friday) followed by a rest period. After every two cycles, a PETScan shows improvement or otherwise. We took all of our cues from the doctor in Texas. His record speaks for itself and the flow chart would read “specialist suggests drug to local oncologist who goes over with patient.” It turned into a bumpy ride. I also want to say that the following wasn’t the fault of anybody. Cancer acts as an incredibly tough disease and the cures for it are educated guesses at best. That’s not belittling oncologists. I got very lucky that my onc not only read the cold facts, but came into every meeting with a warm heart. He’s seen me cry a dozen times. He saw me throw a first pitch at an Orioles game. He’s been with me the entire time. Sure, there were many times I wanted to yell at him (and a few times I actually did) but he was always there and still is. I got extremely lucky with Ari Elman as my oncologist.

Cytarabine didn’t work. The scan after two cycles showed some improvement, but not really enough to ring a bell. The train came off the track after four cycles. We went back to the bullpen and started on Cladribine. The end result mirrored Cytarabine, except for one side effect. The amount of vomiting seemed like a “Saturday Night Live” skit. Except this wasn’t delivered by Will Ferrell. The volume of trips to the bathroom did, at a certain point, make me laugh for how ridiculous the entire experience had become. Let’s get all the other pleasures of cancer some might find gross out of the way at this point. This includes any side effect from the flu, a couple of chipped teeth, a cavity, mouth sores, warped vision in my left eye for a short period of time and needles. Lots of needles. Conservatively, I’ve gone through one hundred needles. When you add up all the time my port became accessed, sticks in my arm for blood draws, triage in the Emergency Department and the unusual double needle for a CT test with contrast. I’ve probably missed some – and would rather not think about it.

Two chemotherapy agents down. Ari suggested I visit Houston and that LCH specialist I mentioned earlier. My brother Bob came along with me and we snuck in two Astros games in our two day trip to Texas. Bob, who just welcomed his first child into the world, is six years younger than me and my best friend. Even though he’s moved down south, we still keep in touch frequently. I vividly remember eating Chick-fil-A in the cafeteria before meeting the specialist and that period of about two hours seem like a week. It’s an absolute blessing Bob accompanied me on the trip. The specialist basically said I would be fine and to continue Cladribine and then start on Clofarabine. I’m purposely not putting the name of the specialist out there because of one tiny detail.

He was wrong. Technically, the blame probably goes on the Mayo Clinic. They read my biopsy as LCH. When the Clofarabine made me sicker and put me on the frequent hospital visit program, I knew something was going on and it wasn’t positive. It got worse. All summer long, I waited for an oral chemotherapy pill to arrive. It took three months. I used it for three days. I’ve never felt closer to death. Nothing felt comfortable. My side effects morphed into main effects and I couldn’t hold down any food. This was a particularly brutal stretch for me and my father.

Dad moved into my apartment that summer. This is still before the pandemic. Dad would get ice cream and we’d talk about life. These conversations will shape decisions I make in (hopefully) the next couple of decades. In a macabre way, these talks were blessings in disguise. The help I received from the rest of my family and friends was remarkable. Let me tell you how checking in with someone who has cancer goes. Everyone makes you feel good at the beginning and gives you a lot of things. Half of these people stop right there. I’m still unsure of the reason. Maybe it’s fear of potentially bothering me. Maybe it’s not accepting that I could die.

Oh, by the way, I didn’t have LCH. After another biopsy, Mayo Clinic reported back that I had Hodgkins Lymphoma. Whoopsie. The next two courses of chemo was so rough that they had to put me on a much lighter drug – but it worked. I’m officially no evidence of disease (NED). This technically means that I’m cured. It also means that the cancer can come back at any time.

I slowly phased out of my job as a sports producer. It’s a dream gig that I had for 15 years and would go back in a heartbeat. From covering the Super Bowl in 2013 to baseball playoffs and even a Stanley Cup Final during chemo, I’ve gotten a great seat to Baltimore’s biggest sports moments since the turn of the century. I even received an award along the way. The good folks at the Maryland Jockey Club gave me the Old Hilltop Award. It’s an honor given to those who cover horse racing. It’s a list I probably don’t belong on, but I’m thrilled to be a part of it. I’m also proud to become a part of Baltimore Sports and Life. Even though I’m just starting out, they’ve been nothing but welcoming on this website.

I’ve left out details from my mental status to my nurses (love you, Judy) to how many tubes of medicine hung around my bed. That’s enough for an entire other article. I will say that I’m down to just three prescriptions – and that’s a win for me. There were a lot of wins on this insane road I hope no one who reads this takes. As for me, I’m happy getting my port out and watching March Madness shortly. I think I’ll root for the Cinderella team.