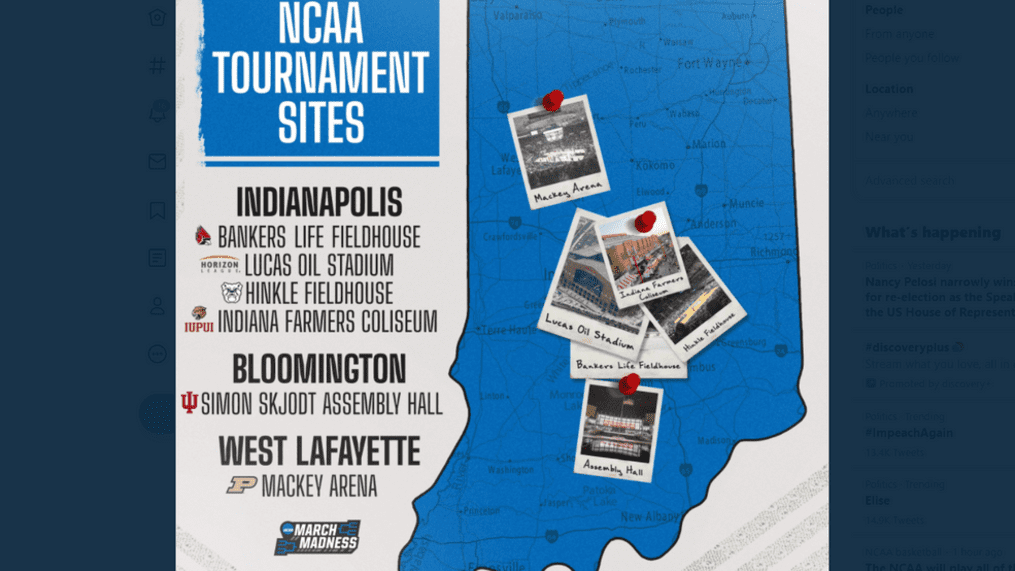 Lady Gaga might have one hundred million reasons to walk away from her situation in her hit song “Million Reasons,” but the pop princess can’t come close to the NCAA and March Madness. Guess how much money the governing body takes in from the tournament that we all watch from the middle of March to early April? Thanks to TV rights – for the most part – the NCAA collects $933 million dollars. The majority of this money goes back to conferences, but the NCAA gets a finders fee of sorts at around 4% (or $37.32 million). Make sure to get a good chuckle when the NCAA runs ads during the tournament saying how the most important part of its job is to help the student-athletes.

The NCAA will air “don’t bet on it” commercials during the tournament. That’s hilarious. Lets play out what would happen if your office pool disappeared: viewership would plummet, interest would ween and Turner Sports/CBS wouldn’t have to pay so much money for rights fees. It’s an interesting sticky wicket that’s always been resolved with a wink and a nod. Players receive a tremendous outfit of clothes and shoes for their service. They just won’t see a dime. With online gambling becoming normal across the country, how many kids have accounts online that look to make an extra – or easy – dollar?

How do we continue to muddy the waters? Toss in a global pandemic. The NCAA still plans to hold its tournament this March after taking a bath and losing out on holding one last season. That’s a lot of lost money. Even before any state gets near 20% of its population vaccinated, the NCAA deems it safe enough to hold a tournament without fans in the state of Indiana. Think of it as a bigger NBA bubble. That worked very well in south Florida over the summer and I hope it does more of the same in early spring in Indiana. I just don’t know for sure if this model – or getting to the big dance – works.

I’ve had the honor of ranking college basketball teams for the Associated Press Top 25 for six seasons. I’m not ranking teams this season, but those that do have an incredible challenge of pitting a team that’s played 18 games to one that’s completed only 12. You can’t knock a team for not playing a game due to Covid. That’s why Michigan will only potentially gain positions in the next week or two. The fluctuation of teams usually evens out by this time in the season. Not this year. Oklahoma gained 15 spots last week while Kansas dropped eight. In the grand scheme of things, the AP vote doesn’t much matter at the end of the year when 68 teams meet in Indiana. It will slightly affect the seeding from the selection committee because they follow the polls and trends in the game.

One more wrinkle that comes into the equation will be written during conference championship games. College hoops provides the best chance at a “do over” for three or four days. Win a handful of games and take a trip to the field of 68. That happens roughly three or four times a season. Cinderella might win the automatic bid ten times this year, which does a number on the “bubble” of college basketball. Outside of Gonzaga and Baylor, we still don’t have a great lay of the land in the sport this year.

Another headline comes from the lack of blue bloods in the win column this season. North Carolina barely has votes in both polls. They are miles ahead of the fellas in Durham. After losing to UNC on Saturday, Duke fell to 7-7 on the season and .500 in the ACC. That’s pathetic for a Blue Devils team that isn’t even on the bubble to make the tournament as of early February. Kansas is going the wrong way, Michigan State doesn’t have a pulse and Kentucky looks like a junior varsity high school team. Here’s the great thing: all of those teams still have a shot of making the final four. They might have to run the table in the conference championship, but they all have Hall of Fame coaches who can make a long run.

Don’t let even a pandemic fool you. The two best teams in the country remain Gonzaga and Baylor. That hasn’t changed since the season tipped in November. Does that mean we will see both teams in the Final Four? It’s not a slam dunk, but it’s likely. Both squads are just at a higher level than the rest of the country. Then again, that’s not exactly how the national championship works. You focus on your own bracket and look at those matchups. That’s the key pre-Covid and post-Covid.

The fact that there’s relatively no crowd whatsoever at these games will give it an odd feel as well. You can get away with that in the early round games that take place during the day, but the rest of the tournament is usually sold out. It will feel really unusual to see a football stadium transform into an empty basketball arena. By that time in the season, all players will be used to the feel of an empty gym for an important prize – just not one that houses 80,000 people.

Here’s one interesting hypothetical that might play itself out: what happens if a team gets Covid in the bubble and can’t play? That very real possibility needs to be addressed before the tournament tips. Do they delay the game or give the non-infected team a walkover and a spot in the next round?

We always have questions in March and your favorite basketball team can still improve from now until tourney tip. This year stands alone with all the “what if’s” swirling in the Indiana air. Let’s hope for a tournament that provides excitement and hope, not fear and arbitrary rules. We are still in a pandemic. Safety, not greed, needs to take home the title this year.