Notes From The First Weekend Of The NCAA Tournament 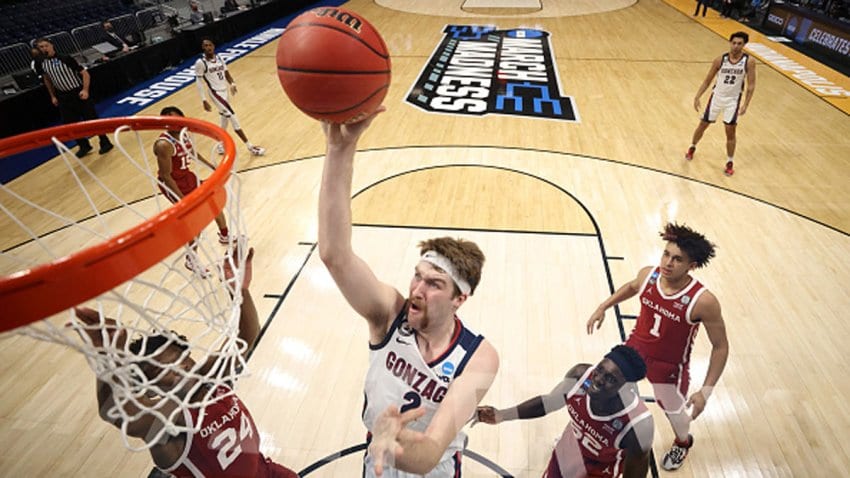 I don’t like making guarantees, but I’ll place my bottom dollar on this statement. You’ll never see a NCAA Tournament like that one that commenced over the weekend in Indianapolis. We lost a No. 1 seed, saw a slew of close games down to the final minute, enjoyed an exceptional run of overtime games on the first full day of the tourney, smiled at Sister Jean, made Oral Roberts jokes, recognized the conference of champions and saw that Gonzaga’s still the team to beat.

We still have fifteen games to go. They didn’t play every game in the 2021 Men’s Tournament because Covid nabbed an upset in the first round. Virginia Commonwealth knew on Wednesday it faced an uphill battle against a disease we haven’t fully figured out just yet. They had to forfeit a game late on Friday night against Oregon. It’s absolutely crushing for the upperclassmen who invest acres of time for no payoff. They get a swag bag (more on that in a bit), a sweet stay at the JW Marriott and a quick exit from their hopes and dreams. We can only hope it’s the single case of Covid to interrupt one of the sports calendar’s most enjoyable events. Also, I hope you didn’t pick VCU in your bracket.

The equality – of lack thereof – the Men’s and Women’s tournaments took center stage on social media. Sedona Prince, a young lady on Oregon’s hoops team, called out the NCAA for a weight room that looked worse than a Best Western. They provided the ladies with a rack of dumbbells and some yoga mats. It looked like the continental breakfast of a workout. The men received five star accommodations. Sedona took to Insta and Twitter and her message took off faster than the Ducks offense. The NCAA in its infinite wisdom corrected the problem immediately  – and then said it was a space issue.

Another hot topic in the first weekend became those gift (or swag) bags that players get when they arrive to the hotel. The men received seemingly a Walgreens counter of toiletries along with towels, shirts, a book about John Thompson and other frills. The women got considerably less, bolstered by a single tampon in the gift bag that didn’t play well in the least. There’s a phrase I never thought I’d write in a sports article. The NCAA’s response? The climate is different in Indianapolis compared to San Antonio. Will you guys ever stop shooting yourselves in the foot? The disparity between food went on display as did the lack of media for the women’s tournament. Here’s the honest truth: it doesn’t make money. It’s a great tournament, covered expertly by ESPN and ABC, but it just doesn’t land on anyone’s antenna. The ratings are meager. It doesn’t turn a profit. Is that fair? No, it’s not. But it’s honest. It’s the Ralph Nader of basketball. A small number of people who enjoy the tournament are incredibly vocal. Still, did you see anything on your timeline that said no upsets took place in the first 16 games? When a game went into overtime for the first 15-seed to make the second round, were meme’s excited about the possibility? I saw one tweet. The numbers for the Women’s Final Four are phenomenal, as is the basketball. We just have too much going on and too many eyeballs choose the other tournament.

Team of the weekend: USC Trojans. Gonzaga looked great. Baylor’s defense remains insane. No one impressed more than a Trojans team in their first two games. In the second round against Kansas, USC handed the venerable Jayhawks their biggest defeat in the history of the tournament. Yikes. Led by the Mobley brothers, the Trojans now get an Oregon team that only played one game – and scored 95 points. Conference matchups don’t always appeal in tournament play. Everyone will circle this game late on Sunday night.

Upset of the weekend: Oral Roberts Golden Eagles. The 4-seed…in the Summit League won its last four games by two, three, three and three points. They can handle close games. ORU upset Ohio State and Florida, National champion caliber teams, to land in the second weekend against Arkansas. Here’s where this ORU team differs from other Cinderella’s. Usually, the team returns to campus and falls in love with themselves after receiving all the attention. That won’t happen for any team left in the dance. It’s more bubble life for ORU, which should provide a bit of humility and concentration. Don’t act shocked if they beat Arkansas. Conversely, don’t be surprised if they lose by twenty.

Underseeded: Illinois Chicago. This team plays out like a modern day “Hoosiers” in the same flipping gym they shot the movie. Take a 101-year-old nun who knows the strengths of the other team to place them in her pregame prayer with the players, a team that values the “five passes before any shot” and “there’s more to the game than shooting, there’s defense and fundamentals,” and you’ve got the biggest blockbuster movie of the year. This team’s listed as a 3-seed on KenPom. They’re at least a four. I absolutely see a path to the title game.

Eleven Heaven: UCLA, who needed to win a play-in game – and Syracuse – made the regional semis in different ways. The Bruins just got past Michigan State in a game that feels four years old. They promptly edged BYU and got a break against Abilene Christian. Syracuse beat a San Diego State team who almost dared the Orange to play zone. They lost that gamble. By a lot. The Orange then took West Virginia down to the wire and survived by the skin of their teeth.

Next round of games start on Saturday afternoon and no games will overlap for the rest of the tournament! That means all day basketball again this weekend. Ok…if I have to watch!