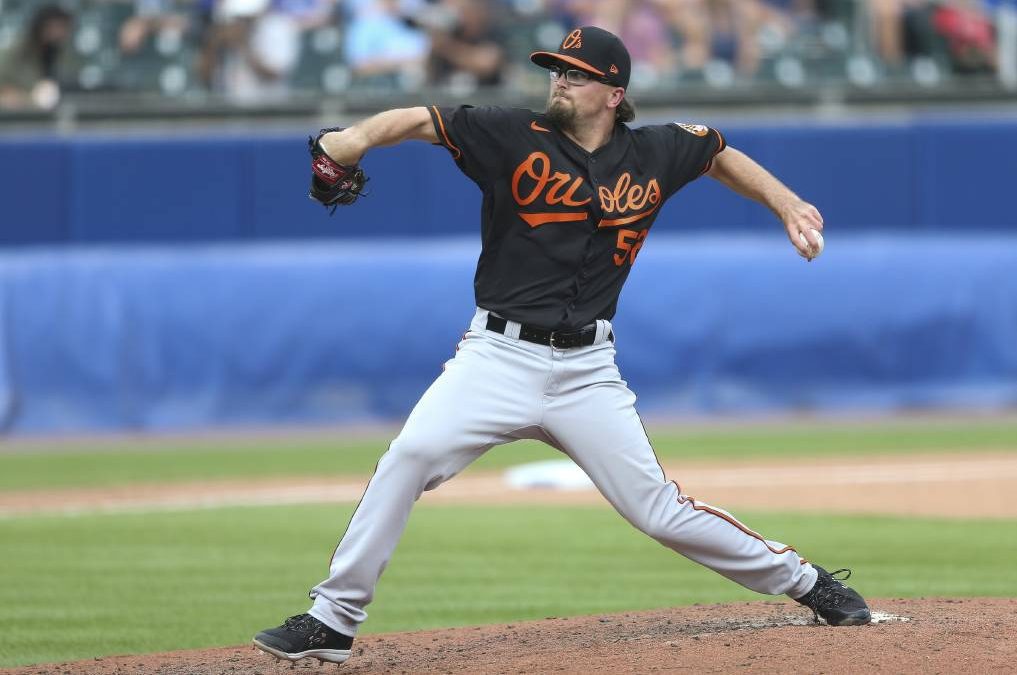 On Wednesday at Tropicana Field, Alexander Wells provided exactly what you want to see in a rebuild: a prospect taking advantage of an opportunity.

In his first start in the majors, Wells provided a very solid 5.2 innings, getting seven strikeouts while allowing three earned runs against the Tampa Bay Rays. He allowed a pair of homers to Randy Arozarena, but the entire 2020 postseason demonstrated there’s no shame in doing that.

Of course, Wells isn’t exactly Grayson Rodriguez or DL Hall, but that’s my point. He’s the perfect kind of prospect to call up now.

Our latest list of the top Orioles prospects ranks Wells at #22 in the Baltimore farm system, meaning he’s not quite important enough to the future where you need to plan for the long term by thinking about his service time. The success of the Orioles will most likely not depend on what year Wells becomes a free agent, so there’s no downside to promoting him now instead of in May 2022.

The fact that he’s at #22 also means there’s less need to treat him carefully and risk ruining his development by rushing him along. You never want a prospect to fail, but if the #22 prospect goes through major struggles against MLB hitting, it probably won’t derail the rebuild the same way it would if they promoted Rodriguez or Hall too early and saw them struggle.

The positives outweigh the negatives for promoting someone like Wells, especially when he’s already made eight starts in AAA this year and had started 86 games in the minors entering 2021. At a certain point, either they’re ready for the next step or they’ll never be.

Wells was just the latest example of why this is the perfect stage of the rebuild to promote players like him. Regardless of whether Wells continues to have solid starts or runs into struggles, you’re learning more about your prospect’s talent than if you just let him stay in AAA the whole year.

You’re also giving him chances at the highest level before there are any expectations and pressure for this team to start winning. I can’t imagine the Padres or White Sox are in the same position to let their #22 prospect figure things out at the major league level without worrying about trying to win the World Series this year.

Of course, Wells isn’t the only player who has spent time with the Norfolk Tides and seems like he’d benefit from getting an opportunity in the majors. If you’ve spent any time on Orioles Twitter the last couple of months, I think you can guess who I’m about to name: Jahmai Jones.

The best argument for Jones isn’t his production at Norfolk. Instead, it is the lack of production from anyone playing second in Baltimore. Even with three homers in his last two games, Pat Valaika still has a poor OPS. There are 263 hitters with at least 180 plate appearances this year and only three of them have an OPS lower than Valaika.

The Rio Ruiz to second experiment didn’t work and Stevie Wilkerson’s hitting made it seem like he’d be better off trying to become a closer full time, which leaves us with Jones as the next man up.

The former Angels prospect, who was acquired in the Alex Cobb trade, has a .851 OPS in Norfolk, leading everyone on the Tides with at least 100 PAs in AAA. He’s also tied for the team lead in walks, showing his discipline at the plate.

Much like Wells, Jones isn’t one of the most highly regarded prospects at his position. Our rankings have Terrin Vavra and the newly-drafted Connor Norby ahead of him at second base. If calling him up now ends up rushing him, there’s another prospect at Bowie and another guy even younger than Jones and Vavra waiting in the wings. The rebuild doesn’t fall apart if Jones struggles but it definitely gets easier if he continues to be a productive hitter at the major league level and upgrades the worst position on the roster.

The concern for promoting Jones has been his defense and that might be true. However, when your starting second baseman has the worst OPS in baseball, I think it’s pretty reasonable to not care too much about the defense at the position.

Of course, there hasn’t been a 100 percent success rate of promoting second-tier prospects, but that shouldn’t be any reason to stop doing it this year. It’s not ideal that Keegan Akin has an 8.19 ERA and has seen his K/9 fall from 12.3 to 8.6 but it’s still better to learn he can’t be a major league starter than to hide him in Norfolk. Like I said earlier, at a certain point either they’re ready or they’ll never be.

While the chances for development are important, promoting second-tier prospects also just makes the on-field product more interesting to watch.

There is zero chance Pat Valaika will have any role in the next winning Orioles team, so what do we gain watching him over Jahmai Jones? While Matt Harvey did just have six shutout innings in Kansas City, I still think most fans would prefer to see someone like Kyle Bradish get his first taste of the majors this year.

Watching a losing team is never fun, but watching a losing team with veterans who have no role in the future is an especially dreadful experience. If a prospect struggles, maybe it’ll be a learning experience to help him improve going forward. However, if Harvey has a bad start, what could he possibly learn to help him long-term? He’s 32 with almost 1000 career innings.

I’m being realistic here and know that they’re not going to call up Adley Rutschman and Grayson Rodriguez tomorrow. However, this is the perfect stage of the rebuild to let some of the less important players get a chance to see how they handle the majors.

After all, what’s the worst that can happen to a rebuild from promoting your #22 prospect?