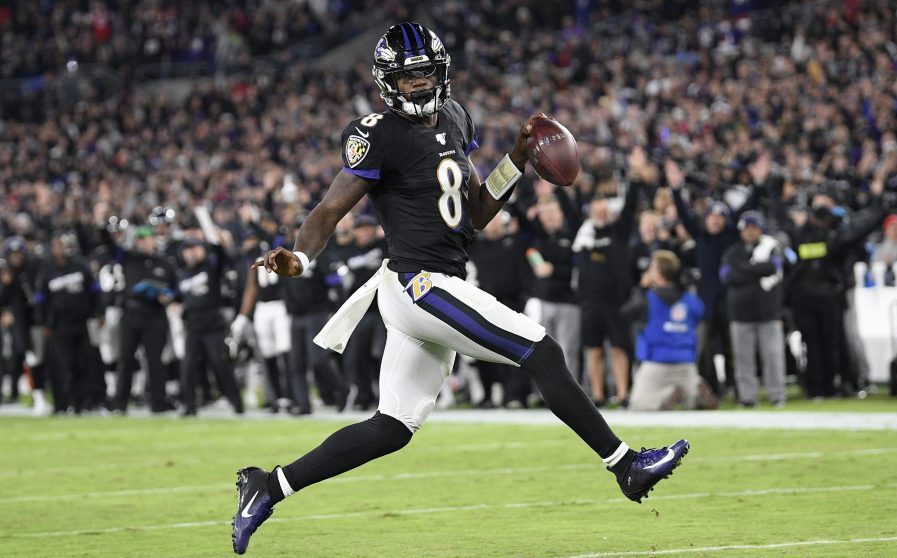 From the moment Lamar Jackson became the presumptive Most Valuable Player of the 2019 season, the Baltimore Ravens knew negotiations over a massive extension lay just around the corner. Indeed, the only real question regarding the deal centered on how high the quarterback market would surge before Jackson signed a new contract with Baltimore.

The NFL’s collective-bargaining agreement prevents teams from extending players already under contract who have less than three accrued years of service, preventing the Ravens and Jackson from formally engaging in contract talks until after the 2020 season. But with that threshold now crossed, the two sides can kick off those talks in earnest for the first time.

Of course, this moment coincides with a precipitous drop in the salary cap for the first time in over a decade, a factor that will dramatically affect the offseason for all but a few teams. The Ravens enter the offseason with just over $20 million in projected cap space, according to Over the Cap. While that puts them in a favorable financial position relative to the rest of the league, general manager Eric DeCosta and his front office will still have to take it into account during the offseason.

Still, while the salary cap didn’t grow as it typically does, that will not prevent the Ravens from reaching a multiyear contract with their superstar quarterback. Jackson remains at the center of every decision the organization makes, and the price tag for a new deal will only increase as time passes. For whatever faults Jackson still has in his game, few signal-callers give their teams a better chance to win every game, and arguably only the Kansas City Chiefs’ Patrick Mahomes and Houston Texans’ Deshaun Watson represent better long-term bet than Jackson.

At present, Jackson has one more season left on his rookie contract plus a fifth-year option to follow. Combined with the potential use of the franchise tag, the Ravens have his services fairly secure for the next few seasons already. However, that likely represents their only leverage in contract talks with Jackson, who delivered two high-quality seasons and an MVP award before his 24th birthday. That will almost certainly necessitate a contract worth an average annual value of $40 million or more based on the deals recently signed by other top quarterbacks.

The Ravens already know the broad figures that will make up Jackson’s next deal, at least to some degree. The team’s chief concerns at this stage relate to the structure of that contract. Reducing Jackson’s cap impact over the next two seasons will allow Baltimore to retain its top in-house talent while also continuing to add pieces on the margins. Jackson should have several opportunities to win a championship, but his best chance could come in the next year or two with smart cap management by the organization.

Getting both parties to agree on that vision could realistically dictate whether the Ravens add to their trophy case.

Perhaps no impasse between player and team came as more of a surprise than the one brewing between third-year offensive tackle Orlando Brown Jr. and the Ravens. Brown, who played effectively all his snaps at right tackle through his first two seasons in Baltimore, shifted over to left tackle when franchise blindside protector Ronnie Stanley suffered a season-ending ankle injury in Week 8.

For a player roundly criticized for poor athletic testing coming out of college, Brown held up exceptionally well in Stanley’s absence, allowing just 18 pressures and zero sacks during his extended run at left tackle, according to Pro Football Focus. While those numbers require context — the Ravens dropped back on only 44% of their run-pass neutral offensive snaps in 2020, higher than only the Tennessee Titans (43.6%) — Brown still demonstrated remarkable proficiency in pass protection.

For a time, this development seemed to bode well for the Ravens, who suddenly found themselves with two elite tackles with which to anchor their offensive line. However, Brown understandably saw his 2020 performance as an opportunity, tweeting “I’m a LEFT Tackle” to his thousands of followers in January. He has not backed off that rhetoric in the time since, sharing his appreciation for Baltimore general manager Eric DeCosta while explaining his desire to protect the blindside.

“It’s never been about the money,” Brown said on social media. “I’m so appreciative for this organization and all my teammates. I couldn’t thank DeCosta enough, he’s [an] incredible football mind and one of the best men I know. I want to live out the dream my dad had for me.”

As long as Stanley remains in Baltimore — and the five-year, $98.75 million extension he signed in October locks him into the team for the foreseeable future — Brown will not serve as the Ravens’ preferred starter at left tackle. The front office could attempt to placate him with a new deal, but if Brown cares only about the opportunity to start on the blindside, only a trade will provide an acceptable outcome for both parties.

Given Brown’s youth (he turns 25 in May) and increasingly impressive play, the Ravens should find a robust trade market if they cannot work out a solution. Players his caliber and age rarely hit the trade market, allowing Baltimore to reasonably demand a first-round pick or more in exchange. While Brown would leave a massive void along the offensive line, the trade compensation could allow the team to find a promising replacement in the draft or use the pick to address one of the roster’s other major needs.