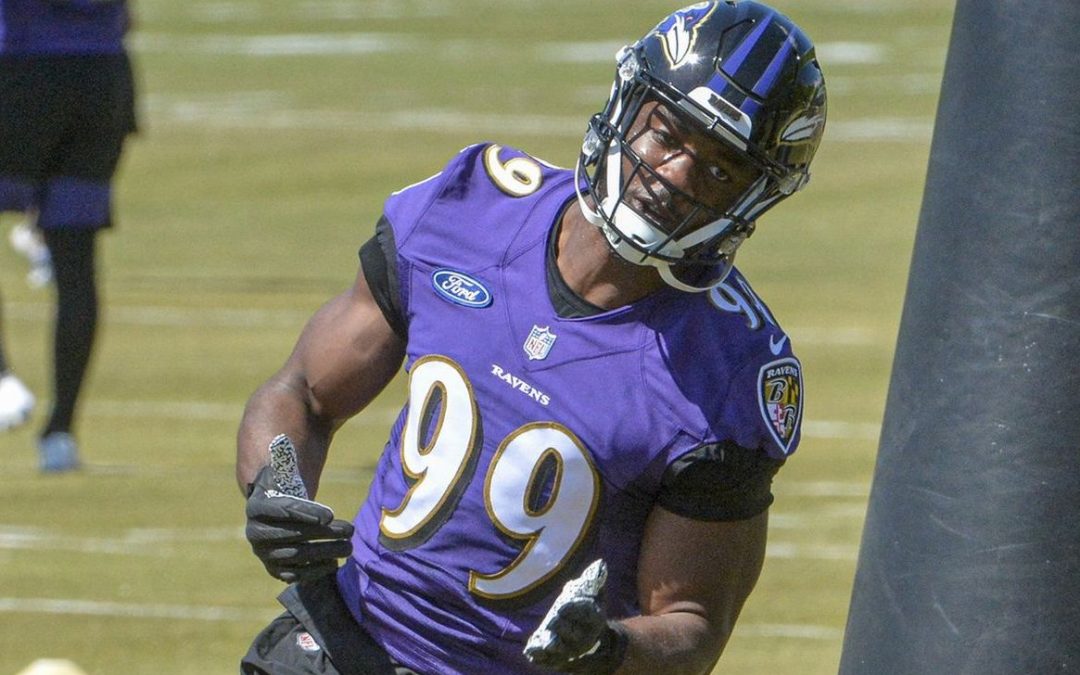 In just eight days, the Baltimore Ravens will report to training camp along with the majority of the NFL. But unlike most of the league, the Ravens enter the season with legitimate Super Bowl aspirations, expectations created by the presence of an established and well-regarded head coach, strong veteran leadership, and an otherworldly talent at quarterback.

But while the Ravens check a lot of the requisite boxes for a title contender, they still have several questions to answer as camp approaches.

Can the Ravens fix their regressing pass rush?

Over the last two seasons, the Ravens defense has experienced a marked regression when it comes to harassing the quarterback. That drop-off hasn’t kept the team from reaching the playoffs, but it further burdened Lamar Jackson and magnified any shortcomings the offense endured.

Back in 2018, the unit finished with the NFL’s sixth highest adjusted-sack rate (8.1%), according to Football Outsiders. Baltimore also registered pressure on 27.9% of dropbacks which ranked 14th in the league, per NFL Next Gen Stats. The defense’s stellar play, headed by budding star Za’Darius Smith, helped end the Ravens’ three-year postseason drought.

That season proved to be difficult to replicate for the Ravens defense. That following offseason, Smith cashed in on his breakout campaign by signing a lucrative multiyear contract with the Green Bay Packers while Terrell Suggs left for the Arizona Cardinals. Though Matt Judon capably filled in as Baltimore’s new lead edge rusher, the departures thinned out the rotation and left the defense vulnerable.

As a result, the Ravens saw their pass-rush efficiency decline. Their defensive pressure rate fell to 25.1% and 25.2% in 2019 and 2020, respectively, both marks ranking outside the top half of the league. The decline manifested in a more dramatic way in adjust-sack rate with the defense finishing 13th and 15th the past two seasons. Last year’s performance proved especially frustrating for Baltimore which added Calais Campbell and Derek Wolfe in March and consummated a mid-season trade for Yannick Ngakhoe.

From a personnel standpoint, the defense appears largely unchanged. Campbell, Wolfe, and Brandon Williams will anchor the line, Patrick Queen and Malik Harrison will serve as the primary off-ball linebackers, and the secondary features the same starters. Only the rotation at edge rusher — Pernell McPhee, Tyus Bowser, Jaylon Ferguson, and newcomer Odafe Oweh — looks noticeably different in terms of role and workload.

The Ravens believe they possess the horses to consistently pressure the quarterback, and their track record generally supports that notion. Still, the team has two years of less-than-stellar pass-rush efficiency and no overhauls in personnel or scheme to suggest a major shift in production. For Baltimore to reach the Super Bowl, it cannot afford to miss on this gamble.

When will the Ravens and Jackson agree to an extension?

Under both the previous and current NFL collective-bargaining agreements, Jackson had to wait until the conclusion of his third season to open negotiations on a long-term deal with the Ravens. Those talks became inevitable for the organization when the 24-year-old quarterback secured unanimous MVP honors in just his second year, and nothing that has transpired since has altered the expected outcome. Whenever Jackson signs his extension, he will become the highest-paid player in the NFL or at least come close.

But while Jackson’s financial future appears all but secured, the timing of the agreement remains somewhat unclear. As the final first-round selection in the 2018 NFL Draft, he has two more years left on his rookie deal — the last season of his rookie contract and the fifth-year option the Ravens exercised earlier this offseason. That time plus the prospect of the franchise tag provides the team with more than enough runway to find an agreeable price with the superstar signal-caller.

Still, the Ravens have no shortage of motivation to lock in Jackson now rather than wait longer. Even though the NFL salary cap plummeted for the 2021 season, the league expects that figure to rebound sharply for 2022 before exploding upward the following year. The closer Jackson gets to the surging cap, the more he can realistically demand. Conversely, Baltimore could agree now to a deal worth slightly more than Patrick Mahomes’ extension — currently the high-water mark — and realistically expect it to age into a value within just a few years.

With that in mind, the main variable affecting the timetable appears to be Jackson’s tolerance for risk. While injuries have the potential to derail extension talks, that happens infrequently at the quarterback position. Just last year, Dak Prescott opted to play on the franchise tag rather than take a subpar multiyear deal and suffered a season-ending ankle fracture five weeks into the season. Despite the gruesome nature of the injury, Prescott still cashed in this offseason, signing a de facto four-year contract worth $160 million. That outcome should only serve to embolden QBs like Jackson to take a hard line during negotiations.

Additionally, Jackson currently represents himself in contract talks. While that shouldn’t affect the final details of an agreement to any great degree, it could make negotiations more difficult during the regular season. At that point, Jackson’s attention will understandably turn to the Ravens’ upcoming opponent, hindering the flexibility the two sides have to hammer out a deal. That dynamic should further incentivize Baltimore to finalize an extension as soon as possible.

How will the revamped offensive line perform?

The offensive line the Ravens roll out to start training camp will look significantly different than the one with which they finished the 2020 season. In the time since, the team traded away a promising young offensive tackle, added two veterans with playing experience in the AFC North, and begun a transition at center.

On the right side of the Ravens’ offensive line, former divisional foes Kevin Zeitler and Alejandro Villanueva have the inside track to starting jobs. While Zeitler comes off a subpar season, he should provide superior play to Ben Powers and Tyre Phillips, the tandem that split starting responsibilities at right guard. Likewise, Villanueva has shown some drop-off from his 2016-18 peak but can capably fill the void left by Orlando Brown Jr., whom the team exchanged for a first-round pick following a trade request.

Along the interior, the Ravens have already shifted guard Bradley Bozeman to center. The move follows a year in which Matt Skura and Patrick Mekari struggled to deliver clean snaps at the position. Bozeman has yet to take a regular-season snap at center, but he spent his final two collegiate seasons as the starting center for the Alabama Crimson Tide.

Still, perhaps the most important difference from last year’s offensive line doesn’t involve a player acquisition or a position switch. Ronnie Stanley, the Ravens’ All-Pro left tackle, returns after a lengthy recovery from a fractured and dislocated ankle suffered last November. Few teams have an offensive lineman at any spot as talented and reliable as Stanley, who immediately upgrades the unit by his presence and will make life considerably easier on his quarterback.

While the O-line has the horses to deliver improved play over last year’s iteration, the expected starters have not spent much time together on the field. Even the most veteran pieces — Zeitler and Villanueva — must adjust to a new scheme. Enough variables exist for the Ravens to feel some level of trepidation as training camp approaches.