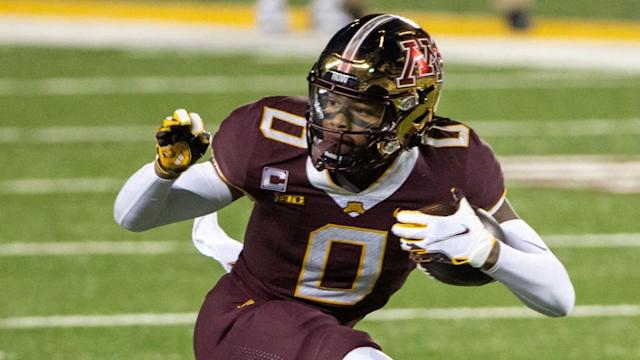 On a night defined by the drama surrounding the plight of several quarterbacks, both veteran and rookie, the Baltimore Ravens remained still. Rather than throw themselves into the maelstrom of Day 1 of the 2021 NFL Draft, the Ravens instead let the event come to them, making sensible selections with their two first-round picks that could nevertheless have significant impacts on the upcoming season.

From the moment Lamar Jackson took over at quarterback, the Ravens’ receiving corps has fallen under a harsh spotlight. The group didn’t keep Jackson from figuratively and literally running away with the MVP award in 2019, but it contributed to the offensive shortcomings the team endured this past year. Former first-round selection Marquise “Hollywood” Brown has yet to establish himself as more than a credible starting wideout, posting decent but unspectacular numbers during his two seasons in the league. Baltimore’s other early round selections at the position — Miles Boykin and Devin Duvernay — contributed even less, overburdening veteran receiver Willie Snead and tight end Mark Andrews in the process.

A single draft choice won’t transform the receiving corps overnight, but the addition of Minnesota wideout Rashod Bateman with the No. 27 overall pick can create a domino effect. Outside of perhaps only Alabama’s DeVonta Smith, Bateman possesses the strongest route-running skills and understanding of leverage and space of any receiver in the class. While the Ravens won’t expect a Justin Jefferson-type rookie campaign, the 6-foot, 190-pound Bateman can become a go-to option on third downs and other must-convert situations. That would push Brown, Andrews, and the other receivers into less-taxing roles better fitting their skill sets.

Should that occur, Jackson’s life will become a lot easier. On numerous occasions last season, Jackson had to bail a sputtering offense out with some nearly incomprehensible feat of football magic. While head coach John Harbaugh and offensive coordinator Greg Roman will still depend on those plays at times, but for Baltimore to break through and reach the AFC Championship Game or more, the offense will need to give its quarterback more layups and easy conversions. The infusion of Bateman and his ability to slip defenders could well make that a reality.

But while Bateman’s selection became an afterthought soon after the Ravens turned in the draft card, the pick of Penn State’s Jayson Oweh seemed to register even less of a blip on the national radar. The 6-foot-5, 257-pound prospect became the rare first-round edge rusher that failed to register a sack during his final collegiate season, a point that will undoubtedly come up until Oweh takes down his first NFL quarterback.

Still, Oweh could provide a lift to the defense as early as this year. Back in March, the Ravens watched as their top pass rushers, Matthew Judon and Yannick Ngakoue, departed for lucrative multiyear contracts elsewhere in the conference. Those departures left the defensive front short on players capable of generating pressure, as aging veterans Calais Campbell, Derek Wolfe, and Pernell McPhee can only provide so much at this stage of their careers while Tyus Bowser and Jaylon Ferguson combined for just 19 quarterback hits a season ago.

Even if Oweh probably faces a longer learning curve than the Ravens’ other 2021 first-rounder, his athleticism trumps any other pass rusher currently on the roster. Defensive coordinator Don “Wink” Martindale has done a stellar job at deploying athletic pass rushers, and Oweh should benefit from that expertise as well. The rookie might not pile up sacks right away, but he can still meaningfully contribute to the pass rush while he hones his craft.

With Bateman and Owen now in the fold, the Ravens have two more selections on tap for Day 2 of the draft and another five coming on Saturday. The offensive line could still use a boost in the wake of Orlando Brown Jr.’s departure and the secondary could benefit from some competition and depth, and both areas should see additions before the end of the weekend.

But without making any grand maneuvers or making much noise, the Ravens have already addressed their two biggest needs in a prudent, judicious fashion. Few teams can make the same claim, and even fewer can expect to compete into mid-January this upcoming season.