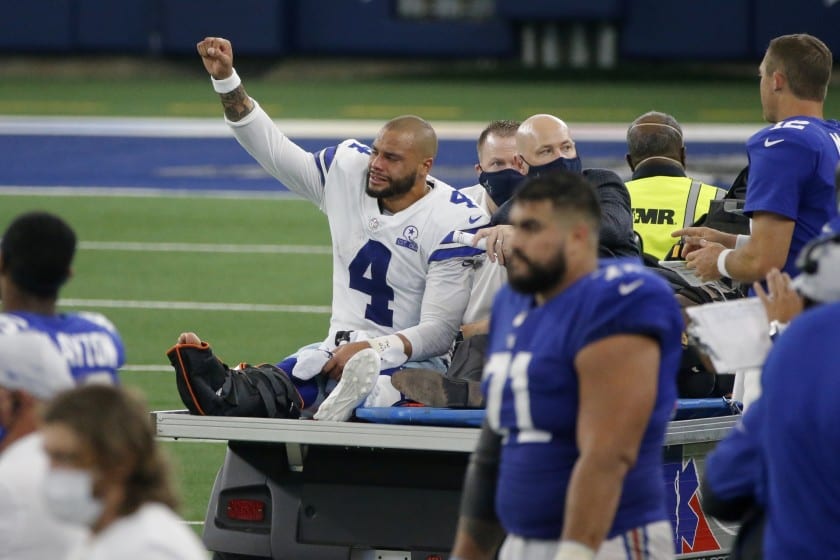 With Dak’s injury and Alex Smith’s return, how will the NFC East now shake out?

In the span of about an hour or so on Sunday, the balance of the NFC East might have shifted off its axis. The division was never going to be a stronghold in 2020. Not with the Giants and their new coach and Washington still trying to figure out if its first-round quarterback is any good and the Eagles and the Cowboys trying to overcome their limitations from the past couple of seasons to make it back to the postseason.

But the right ankle of the NFC East’s best quarterback was demolished on Sunday. And not too long before that, the quarterback who we had last seen getting his own leg crushed two years ago returned to the field for what he called a “very surreal” moment. For Cowboys quarterback Dak Prescott, playing on the franchise tag of $31.4 million, the last play of his 2020 season was a debacle. As he scrambled for yardage, he was brought down awkwardly while twisting his ankle into an unnatural angle. He left the field in a cart with tears streaming down his face on Sunday. It was heartbreaking.

Yet, Alex Smith’s return to the field as Washington’s quarterback was uplifting. The last time the NFL audience saw him was when his leg was injured so badly with a compound fracture that he required 17 surgeries to repair it and nearly lost the limb to an infection. But on Sunday, with his wife and kids standing and applauding from the stands, Smith took over for the injured Kyle Allen, who was taking over for the ill Dwayne Haskins. Smith took plenty of hits and his team still took a beating (welcome back to the NFL, Alex!). But hey, Smith was back, and that’s a pretty damn cool story even if Washington don’t have much of a prayer to make the playoffs.

So after five weeks, what do we make of the NFC East now?

Dallas Cowboys: Even before Prescott’s devastating injury, Dallas hadn’t played well this year. In Week 5, those struggles continued with the Cowboys falling behind by double digits to the winless Giants. Considering Dallas had been shellacked the week before by Cleveland and considering the team has allowed the most points of anybody in the NFL, it wouldn’t have been a stretch to see New York’s offense embarrass Dallas’ defense.

Prescott had been fantastic so far in 2020, throwing for nearly 1,700 yards and nine touchdowns in the first four games. He was playing at an MVP level. But he’s gone now. Luckily for the Cowboys, they have the best backup quarterback in the NFC East (perhaps Alex Smith notwithstanding). Andy Dalton led the Bengals to five playoff appearances, and yeah, even though he never actually won a postseason game, he’s still a solid signal-caller if you’re in need of a backup. Heck, look at the last drive Dalton led on Sunday that led to the team’s game-winning field goal when he connected twice with Michael Gallup on impressive throws (and catches) to improve the Cowboys to 2-3. The team will hate to miss Prescott, and Dalton will struggle to put up half the numbers Prescott did, but in this weak division, Dallas is still the favorite.

Chances of winning the NFC East: 55%

Philadelphia Eagles: At this point, does anybody really trust Carson Wentz to lead his team to sustained success? Not when he’s throwing a league-leading nine interceptions through five weeks. Since the Eagles won the Super Bowl after the 2017 season, Wentz has won 15 of the 31 games he’s started. He’s thrown for plenty of yards and plenty of touchdowns, and I’m not saying the Eagles mediocrity since Nick Foles was named Super Bowl MVP is due solely to Wentz. But Wentz hasn’t shown the capability that he’s the franchise quarterback that can lead Philadelphia back to an NFL title.

After the Eagles’ loss to Pittsburgh on Sunday, they’re 1-3-1. Not all of that is Wentz’s fault. The defense hasn’t been good either. With the exception of its performance against San Francisco in Week 4, opponents haven’t had much trouble scoring against Philadelphia. It’s also unlikely the Ravens offense will struggle against the Eagles this week. Or as the Philadelphia Inquirer’s Mike Sielski wrote after the Steelers loss, “Against the two most talented and best-coached offenses they’ve faced so far, the Rams’ and the Steelers’, [Eagles defensive coordinator Jim] Schwartz and his defense have given up an average of 37.5 points. They’ve given the Eagles little chance to win. They’ve been embarrassed. God help them, they get Lamar Jackson next week.” Falling to 1-4-1 after Week 6 would NOT help the team’s playoffs chances, even if Wentz suddenly starts playing the way Philadelphia has always hoped he can.

Chances of winning the NFC East: 35%

The Washington football team: This team is an absolute mess. The offense is one of the worst units in all of football (it ranks No. 30 in yards gained and No. 30 in points scored). The defense has allowed its last four opponents to score at least 30 points per game. Washington has lost by 15 points to Arizona, 14 points to Cleveland, 14 points to Baltimore and 20 points to the Rams. This team is going nowhere fast.

We might not see Smith for the rest of the year since he presumably will return to his spot as the No. 3 quarterback behind Haskins and Allen. But this team needs much more help. Its next three opponents are the Giants, the Cowboys and the Giants again. Win two of those three, and suddenly, the team is 3-5. Not great, but it would certainly be better than where Washington is now. But who’s to say Washington could beat the Giants anyway?

Chances of winning the NFC East: 8%

New York Giants: When first-year coach Joe Judge took over the Giants organization, he instituted some old-school discipline tactics while bringing in the respect afforded to anybody who ever had success as an assistant coach for Bill Belichick. “I’m a big believer in educating our team in why we’re doing things the way we’re doing,” Judge said before the season, but the only education the Giants fans have gotten is that former first-round pick Daniel Jones still isn’t a quality starting quarterback.

New York had a chance to beat Dallas last Sunday and pick up its first victory of the season. But the defense couldn’t contain Dalton late in the game, and the offense wasn’t good enough to keep pace. Before Week 5, the Giants were the worst team in the league in points scored and the second-worst in yards gained, and even though Judge said after the Cowboys loss that he could see signs of progress in his team, there’s little doubt that New York is the worst team in the conference. New York won’t make the postseason, and if Jones keeps playing like this, the team won’t have a quarterback for the future either.

Chances of winning the NFC East: 2%