Where will J.J. Watt end up? The oddsmakers have released their best guesses 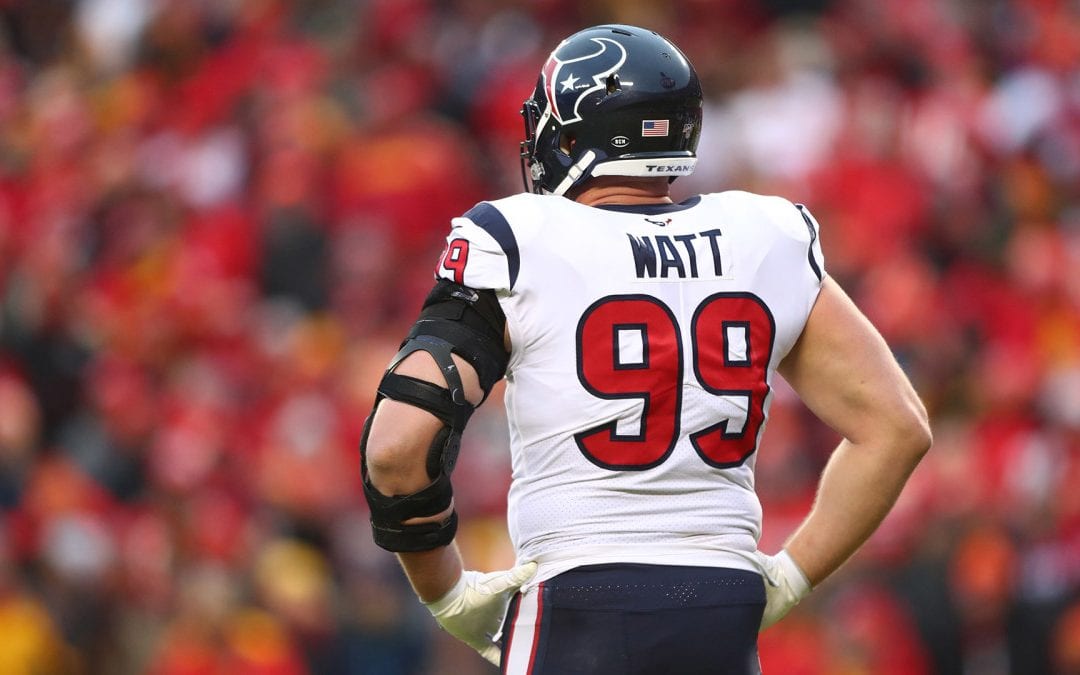 Even four days after the fact, it still seems hard to believe that the Texans and star defensive end J.J. Watt parted ways so suddenly, shaking up the city of Houston, the AFC South and the entire NFL. Unsurprisingly, 12 teams reportedly are interested in signing the 31-year-old, five-time All Pro who was named Defensive Player of the Year three times, and some of the top players in the league went on Twitter to express their own interest.

Watt’s brother, Steelers linebacker T.J. Watt, posted a GIF of The Rock motioning with his hand to come forward. Bills receiver Steffon Diggs wrote, “Just hear me out real quick big fella” with a mischievous smile emoji. And Cowboys defensive end DeMarcus Lawrence used his own emoji to implore Watt to give him a call.

BetOnline.ag also released odds on Monday, and afterward, about half of the NFL’s fans could feel hope that Watt maybe, sorta, kinda had a chance of signing with their squad. After all, some of these teams, if they could sign Watt, would immediately increase their chances of putting together a potential Super Bowl contender.

Remember this, though: Watt has missed 32 games in the past five years, and solid (or better) defensive ends like Shaq Barrett, Jadeveon Clowney and Bud DuPree also could be hitting the free agent market, potentially watering down the feeding frenzy Watt’s availability might normally provide.

Here are the odds of teams signing Watt, according to the online sportsbook:

Now, let’s take a quick look at how Watt could fit in with some of these teams to see if it makes sense for them to spend a good chunk of their salary cap to bring in one of the best defensive players of the past 20 years.

Steelers: Considering both of Watt’s NFL-playing brothers, T.J. and Derek, suit up for Pittsburgh, this could work well. In 2020, Pittsburgh’s defense was one of the best in the NFL, so adding J.J. Watt would almost be an embarrassment of riches. The problem is that the Steelers are currently about $30 million over the salary cap, so they’d have to move around plenty of pieces to fit in Watt, who probably would have to sign for the veteran’s minimum salary. There also might not be an easy place to fit Watt into Pittsburgh’s 3-4 defense, especially considering Watt isn’t the player he was three or four years ago. On the Steelers, Watt probably wouldn’t be the star. He might not even be an every-down player. Though Pittsburgh is the betting favorite to land Watt, I would not put my money here.

Bills: At this moment, Buffalo is about $2 million over the salary cap limit for the 2021 season, so it seems like it wouldn’t be that difficult to find a place for Watt. As the Buffalo News helpfully points out, here’s how the team could manage it. “The Bills could save the following cap space in 2020 by restructuring players who have long-term deals: Tre’Davious White ($7.5 million), Stefon Diggs ($7.1 million), Dion Dawkins ($4.73 million), Mitch Morse ($3 million) and Jordan Poyer ($2.6 million). Releasing players would also create space. The big savings via that route include John Brown ($7.9 million) and Morse ($7.59 million).” The Bills defense was mostly average last year, including its pass rush, and Watt certainly could help a defense that finished 15th in sacks. A defensive end duo of Watt and Jerry Hughes would sound pretty good to the ears of Buffalo fans.

Packers: Green Bay has two factors going for it: It would allow Watt to return to Wisconsin, where he grew up and where he played college ball, and it would give Watt a real chance to try to win a Super Bowl. Green Bay has been to the postseason in 10 of the past 12 years, including four NFC championship games (Watt has been to the playoffs six times in his 10 years but has never made a conference title game). Both of those could be a real selling point to Watt. And then there’s this, via USA Today: “The Packers operate on the opposite end of spectrum as the Texans, who have quickly become the laughing stock franchise of the league. The Packers have four strong leaders—Matt LaFleur, Brian Gutekunst, Russ Ball and Mark Murphy—running a stable franchise that knows how to win. Consistently.” It’s unlikely that Watt would ever have to leave Green Bay because of incompetent management, the way he just did in Houston.

One last prop bet: One other fun wager from BetOnline.ag dealt with the aftermath of drunk Tom Brady. You probably have already seen the footage of a clearly blitzed Brady after the Buccaneers Super Bowl victory parade a few days after Tampa Bay’s historic victory, and you might have even watched Brady toss the Lombardi Trophy to Cameron Brate during the boat parade.

But not everybody was thrilled with Brady’s toss. Lorraine Grohs—whose father, Greg Grohs, designed the first Lombardi Trophy—said, “It just upset me that this trophy was disgraced and disrespected by being thrown as if it was a real football. I have a big history of this trophy being made by my father, and it’s such an honor, and I know all the craftsmen that made it when my dad was there also at Tiffany’s. And it takes a lot of hard work. … I personally would like an apology, not just to me and my family and the other silversmiths but to the fans, all the football fans, the other team players.”

If it were me, I’d take the longshot and go with “no.” That’s because Brady knows he has the backing of his general manager. On Twitter, Tampa Bay GM Jason Licht responded with a GIF from the movie Stripes with the caption, “Lighten up, Francis.”