The Orioles Are In 1st Place & I’m Conflicted 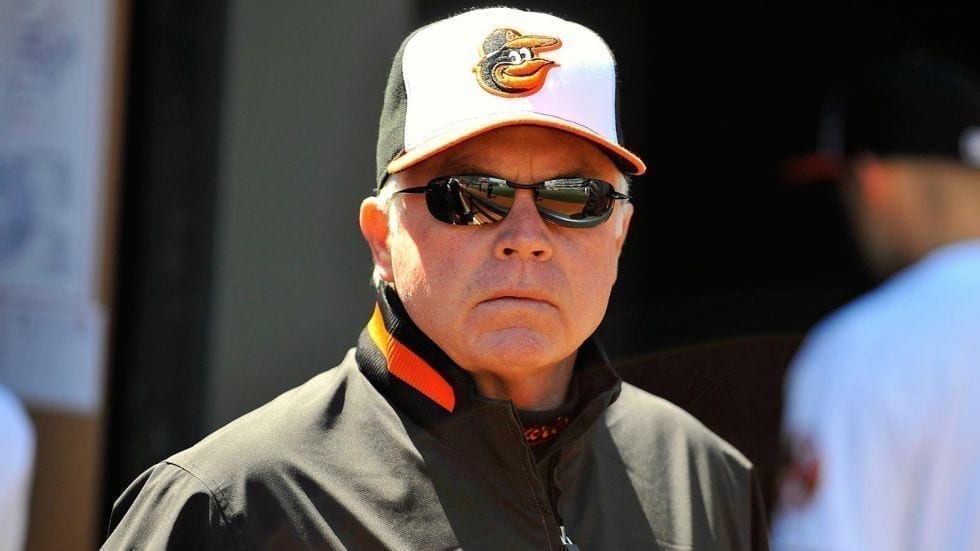 Memories of the ineptitude of the Baltimore Orioles during 1998-2011 are not that distant. Rationally, one knows only one team can the World Championship each year. There is an understanding that what you want is a team which goes into seasons annually having a chance. In that sense, it’s easy to appreciate the O’s showing to be competitive for a 5th consecutive season. At 37-27 entering play tonight, Baltimore is tied with Boston for first in the AL East. Only Texas has a higher winning percentage in the American League. The O’s are in a good position to reach the post-season for a 3rd time in this 5 year run.

Having remembrance of the organization’s not-so-distant failures, and appreciation for the positive consistency which has been established over this latter half-decade; I keep asking myself, “Why am I not enjoying this year more?”

The internal conflict I feel over the O’s is being thank-full that they are again relevant, while having those thoughts mostly drowned out by the louder parts of my mind which are screaming out, “They aren’t good enough.”

There is some guilt there.

The guilt being trying to imagine a conversation with myself at pretty much anytime during that ’98-’11 time period.

What if I could speak to myself from November 2002?

2016 Chris: “I’m having a hard time really enjoying this 2016 season. Yeah, the O’s are in 1st place. Yeah, they definitely have a good chance to get back to the playoffs. But the rotation is mostly a horror show. With the system limitations, and the lack of starting pitching to trade for anyway; it doesn’t seem overly plausible to address the primary weakness.”

So I hear my former-self, and a large part of me says love this team for what they are. Flaws and all.

When the O’s flex their power, and the homers start flying – it’s easy to puff up the chest, and raise your arm’s like The Night’s King:

The O’s are 3rd overall in Slugging Percentage. This isn’t a surprise. It isn’t a fluke. For a now 5th consecutive season the O’s are one of the most powerful teams in the game. In this run, it’s probably their most powerful incarnation yet. They’ve put 102 homers on the board in their initial 65 games, an average of 1.57 per game. That puts them on pace for 254 homers, right in range with the franchise record of 257 set in 1996.

Yet, that power can only be enjoyed so much, because too often the line-up is all or nothing. The on-base percentage is currently 14th overall.

Generally, you have to look at the offense as a strength. The O’s are 8th overall in runs scored, and 7th in runs scored per game. However, as they finish their 3 game series in Boston tonight, it’s easy to look and compare their offense with the Red Sox.

Will the Red Sox offense come back to the pack some as the season progresses? Maybe.
Will the O’s offense reach another level? There are some individual players with room for growth, but the overall team rankings seem like accurate representations of who they will collectively remain to be.

Looking at the offense, again there is some internal conflict. The O’s offense as a whole is a strength of this team. However, realistically it isn’t the best offense in their own Division.

That leads to me hearing more voices, some of them not echoes of my own past self.

Buck Showalter has been the Orioles Manager since July 29th, 2010. He inherited a team which was 41 games under .500.

Under his watch, the O’s have been built into a team worthy of respect.

I’ve never been fortunate enough to have a conversation with Showalter. That said, I surely hear the mantra he’s regularly articulated about, “We like our guys.”

That commentary from Showalter isn’t Buck ignoring the issues that individual players have. Showalter is surely aware as well as anyone. It’s a statement of liking who these guys are as a whole. Knowing their on-field strengths and weaknesses. Liking their competitiveness, and professionalism.

I imagine a consistent aspect of the players who have been added to the organization since Showalter came on-board, is finding players who match the traits of the clubhouse as it exists.

Showalter deserves a lot of credit for changing the mentality which existed here. He made it clear that dreaming of a .500 finish was not sufficient. He wanted players that wanted to accept the challenge of playing in the AL East. He made fans believe that improvement was possible.

So, be it my own internal voices, or the voice I project for Showalter – when part of my brain says, “Boston has a better offense,” I also hear the retort of, “We respect the other side, but our guys are plenty capable, and we aren’t backing down.”

If one believes that one of the reasons the O’s have improved under Showalter’s tenure is that he has instilled a culture where they believe in themselves; is it a failure as fan to think our guys are not good enough?

The metrics (aside from Defensive Efficiency, which shows the O’s ability to convert balls in play into outs) haven’t loved the O’s defense this year, but I believe in the glove work. You get Hardy back at SS, and the infield defense is superb. The corner OF defense isn’t great, but if you look at Rickard as being closer to average vs. his poor defensive numbers – then him being available as a defensive replacement for Kim and Trumbo can be viewed as a good thing.  Jones numbers in Center have fluctuated during his career, and are down here in ’16 after a couple of positive years. There is a good argument to be made that the defensive statistics will improve for Jones with increased throwing opportunities.

The other clear strength to most is the bullpen. Yes, O’Day was having some struggles (5 homers in 20 innings) prior to going on the DL. Even if the strained hamstring wasn’t factoring there, I have no concerns. When he gets back, I think he forms an excellent quartet with Britton, Brach, and Givens. It can be argued that Britton is the best closer in baseball. Brach has followed-up two strong years with an even better 1st half here in 2016. Givens is getting crushed by lefties, but there is reason (primarily his MiL production vs. LHH) to believe those numbers are inflated. He’s also overwhelming RHH, and has 44 k’s in his 31.1 innings of work. Overall, if Givens is your 4th option out of the bullpen, you are in better shape than most. There are also signs that Bundy is progressing. Given the rotation in-front of them, it’s hard to imagine asking more from this group. Baltimore’s bullpen being 2nd overall in WPA is good argument on their year-to-date production. Maybe the O’s could augment that group with the addition of Sean Doolittle?

To summarize: The power is great, the bullpen is exceptional, the defense is at-least capable. The on-base % is not a positive, but maybe it’s not fair to label it a horrific weakness.

The crux of why I’m not enjoying this year more, and why I feel the O’s aren’t good enough is three-fold:

1) The rotation is not good enough.
2) The MiL system is weak.
3) The ability to address the rotation weakness is hampered by the lack of available starters, and the limited system.

When the best obtainable options to improve the rotation are Rich Hill, Jeremy Hellickson, and Andrew Cashner; there is a reasonable argument to stating the O’s are better off going with what they have.That argument being that trading commodities for one of the aforementioned trio will further deplete a thin system, and won’t bring difference makers back.

While watching the game tonight, someone will point out that the O’s would be in a better position with Eduardo Rodriguez still under O’s control. While accurate, I believe trading Rodriguez for Andrew Miller was the right decision.

I would have rather moved Zach Davies as part of a package for a bigger difference maker; but I won’t crucify the O’s for trading Davis for Gerardo Parra to try and address an obvious weakness.

The bigger argument with the rotation is the O’s are unwilling to compete at the highest levels of Free Agency for starting pitching, and haven’t developed enough internally. (Seems clear the O’s will be attempting to change this, given their 2016 MLB Draft.) So, that leads the O’s to signing mid-tier options with flaws such as Ubaldo Jimenez, and Yovani Gallardo. You sign those guys hoping for the best, but being completely aware that Jimenez has battled his control for his career, and that Gallardo’s peripherals have been in consistent decline. You sign them hoping they can be reasonably competent ML starters. For at-least ’16, we’ve seen Jimenez implode. Gallardo is working his way back from his shoulder issues earlier this year, and will be starting Saturday.

My hope for Gallardo at this point, is that he shows to be a league average 5th starter. I don’t have any confidence past that.

I don’t like Tyler Wilson, or Mike Wright better than Hill, Hellickson, or Cashner; but I’m not convinced that any of the three will be enough of an improvement over Wilson or Wright to be worth the player cost to obtain.

Chris Tillman’s improvement this year has to be sustained throughout the year, and Kevin Gausman has to be better. We went into the year believing Gausman was the roster’s biggest X-factor, and that remains true. Some guys you ask to give you a chance to win. With Gausman he has to be a reason you do. Judging pitchers by a win/loss record is foolish, but 11 starts into his 2016 season; Gausman is 0-4. He’s gone over 6.1 innings just twice, and has allowed 11 bombs in 63 innings. There is no plausible scenario where the O’s get where they want to be this year, without Gausman being a positive difference maker the remainder of the way.

The positives of this team are good enough to again reach the post-season. The limitations of the team are severe, and seemingly without answers.

It’s a very difficult situation the O’s find themselves in. One that leaves me conflicted.